Pirelli’s update of its enduro and eMTB tire offering is well overdue. For too long, they have been pairing heavy casing constructions with tread patterns with a level of aggression that lags behind the aggressive enduro and super enduro bike geometries now ubiquitous at gravity-oriented riding spots all over the world. Thus, today’s arrival of their new Enduro and eMTB “M” Tread for Mixed-Terrain, with its burlier tread pattern paired with the new SmartGRIP Gravity rubber compound, is welcomed. 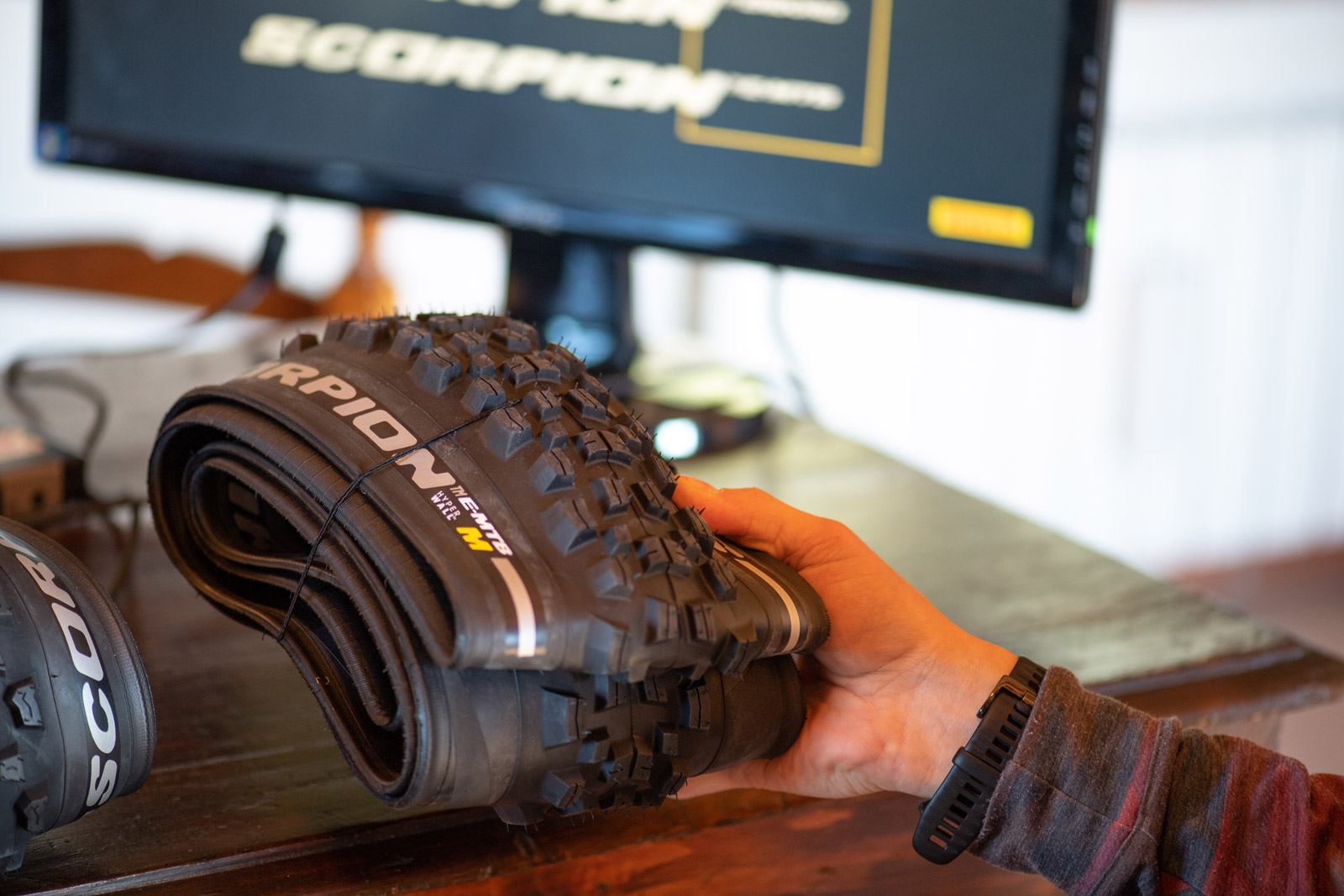 Casing construction options are expanded, too. Today’s launch sees the addition of a lighter option ProWALL for the Enduro Line, as well as the HyperWALL casing specifically at eMTB; that one is said to offer all the reliability of a DH casing tire in a lighter weight package that permits much lower tire pressures, too.

Pirelli’s line of Scorpion Mountain Bike tires can be a little confusing, given that all of their MTB tire offerings from XC/Trail, through to Enduro/e-MTB, all come under the “Scorpion” model name. Within that latter category, you will find three different tread patterns designed with different riding conditions in mind; “M” is thee Mixed Terrain tire, “S” is the Soft Terrain Tire, and “R” is the rear-specific. 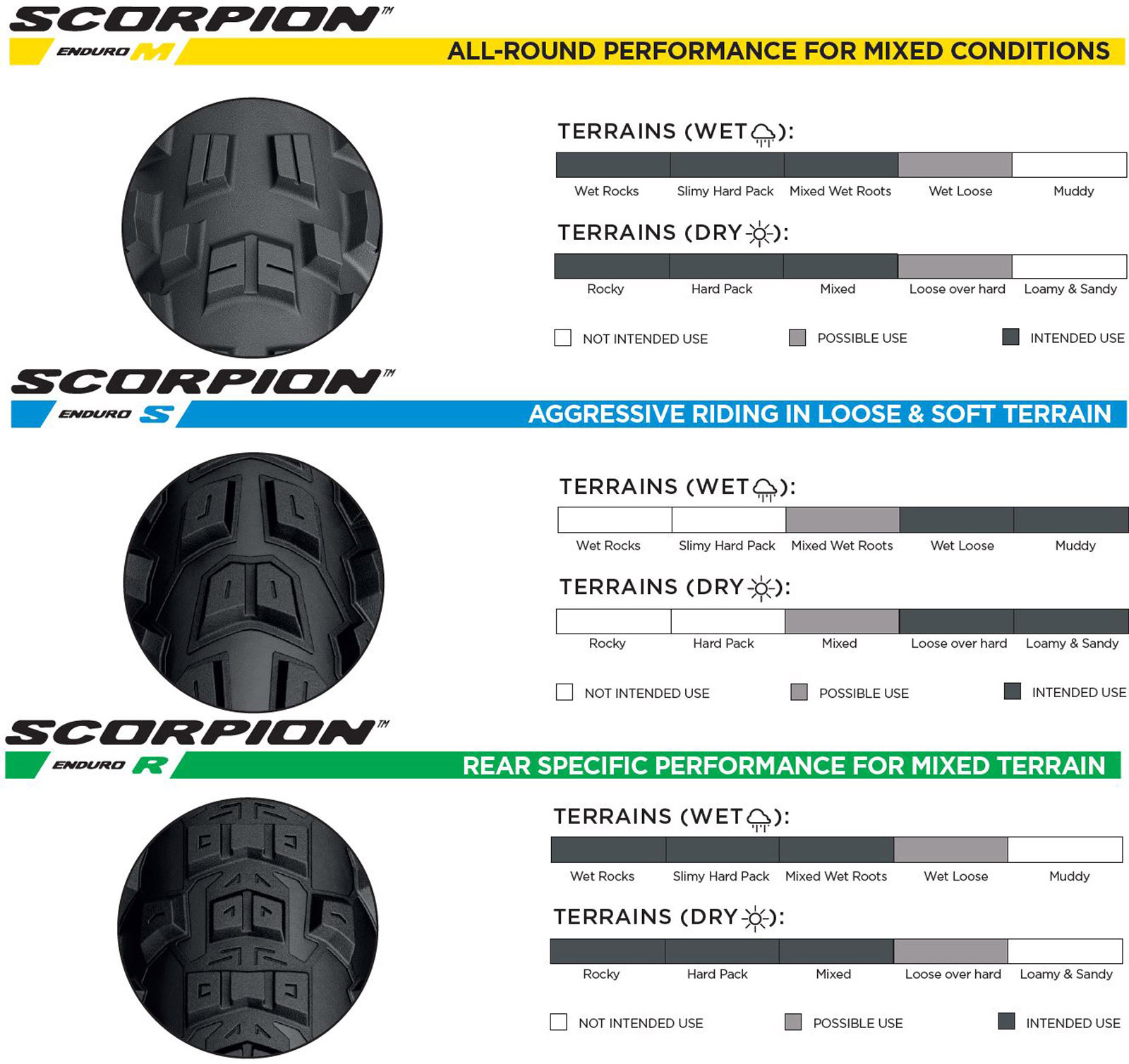 Updates rolling out today pertain primarily to the Scorpion Enduro and Scorpion eMTB range of tires. The Scorpion XC offering unveiled in 2019 remains entirely unchanged, as does the Scorpion Trail range, save for the addition of a 2.6″ width option for the Mixed-Terrain (M) and Hard Pack (H) tread patterns, sure to be welcomed by Those who have the clearance for it, and the appetite for the lower pressures that a higher volume tire can allow for.

So, what’s new for the Scorpion Enduro and Scorpion eMTB tires? 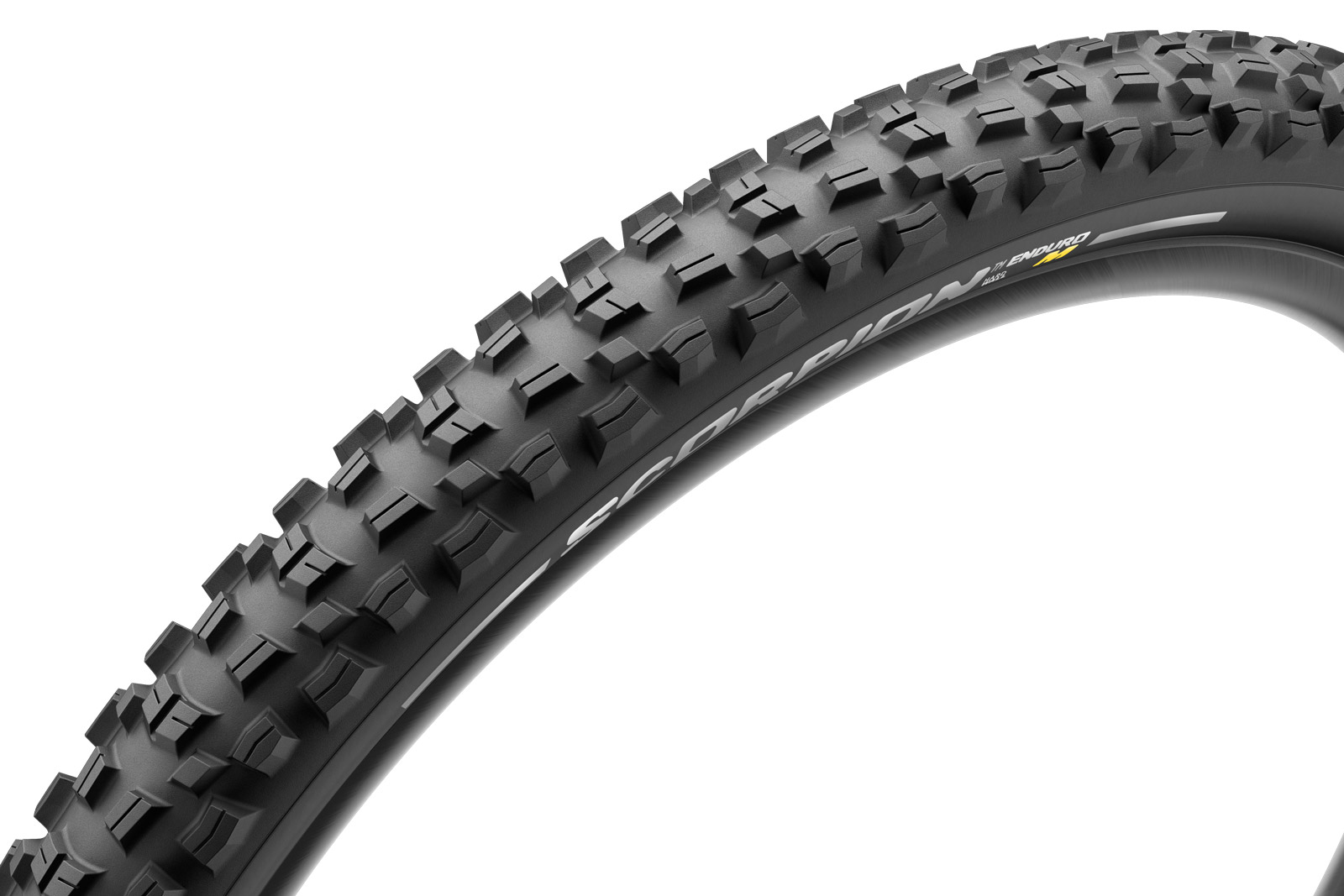 The big news here is that long overdue update of the Mixed-Terrain offering, now more aggressive than ever. The previous version of this tire featured fairly small tread blocks in a high density arrangement, giving it a rather cross-country aesthetic. The new tire remedies that with a lower density of tread blocks that have a relatively larger surface area, with more space between pairs of blocks, particularly at the center tread. 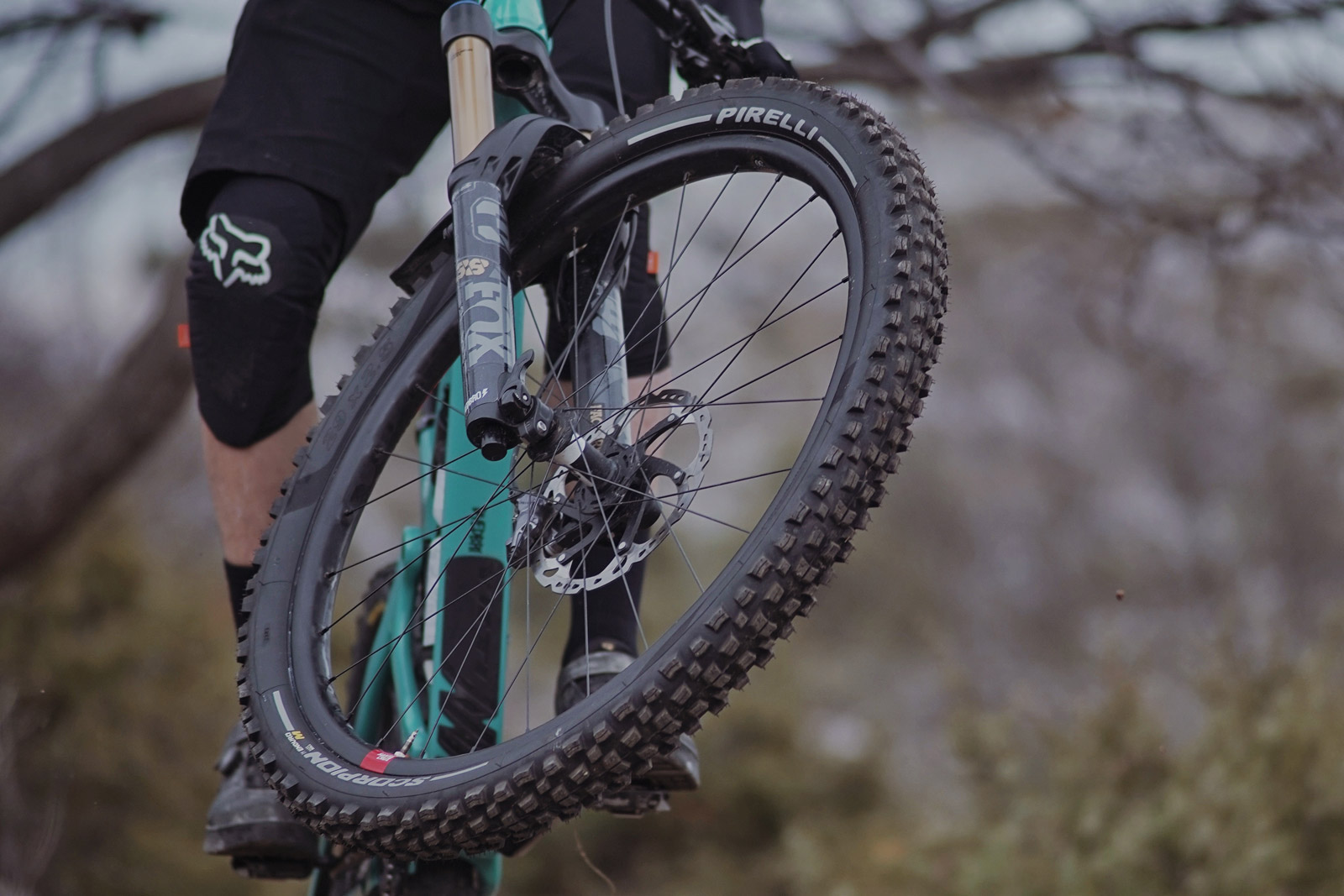 The Theory Global Racing team were testing the new M Tread Pattern at EWS last season, though likely with a different tire construction

The blocks themselves are much taller, too, able to bite deeper into soft or loose terrain. Overall, the new tread pattern is said to offer vastly improved braking traction thanks to broader surfaces at the trailing edge of the center blocks, and improved tread pattern longevity in rough riding conditions. Though the blocks are now composed of a relatively softer rubber compound (the SmartGRIP Gravity), the increased size and shape of the tread blocks lends to better stability and durability, and improved resistance to tearing. 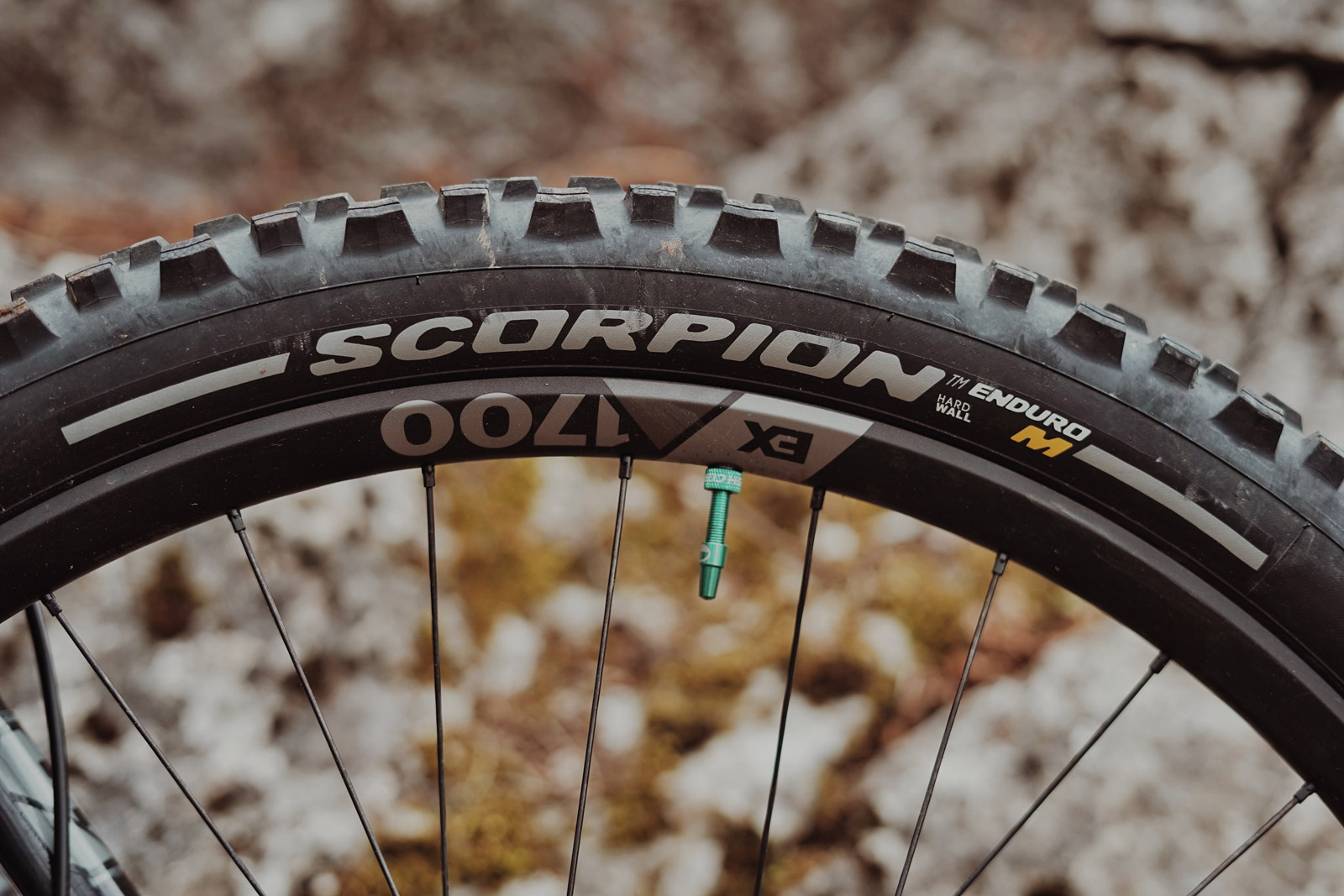 The M tread retains a transitional knob between the center tread and side knobs, in a bid to keep grip consistent as the bike is leaned onto its edge through a corner. At the edge, the side knobs are staggered a little, each featuring a full length sipe oriented in the direction of travel, thus offering some lateral flex.

What else is new for the Pirelli Scorpion tires?

A new, softer rubber compound of course. It is called SmartGRIP Gravity, and it replaces the original SmartGRIP seen across previous iterations of the Scorpion range. Here, the rubber durometer is lowered to a Shore A Rating of 50a, and it is used for the entire depth of the tread pattern. This decreases in static stiffness is said to increase the tire’s ability to conform to the terrain, thereby reducing vibrations transmitted to the rider, increasing grip and comfort simultaneously. 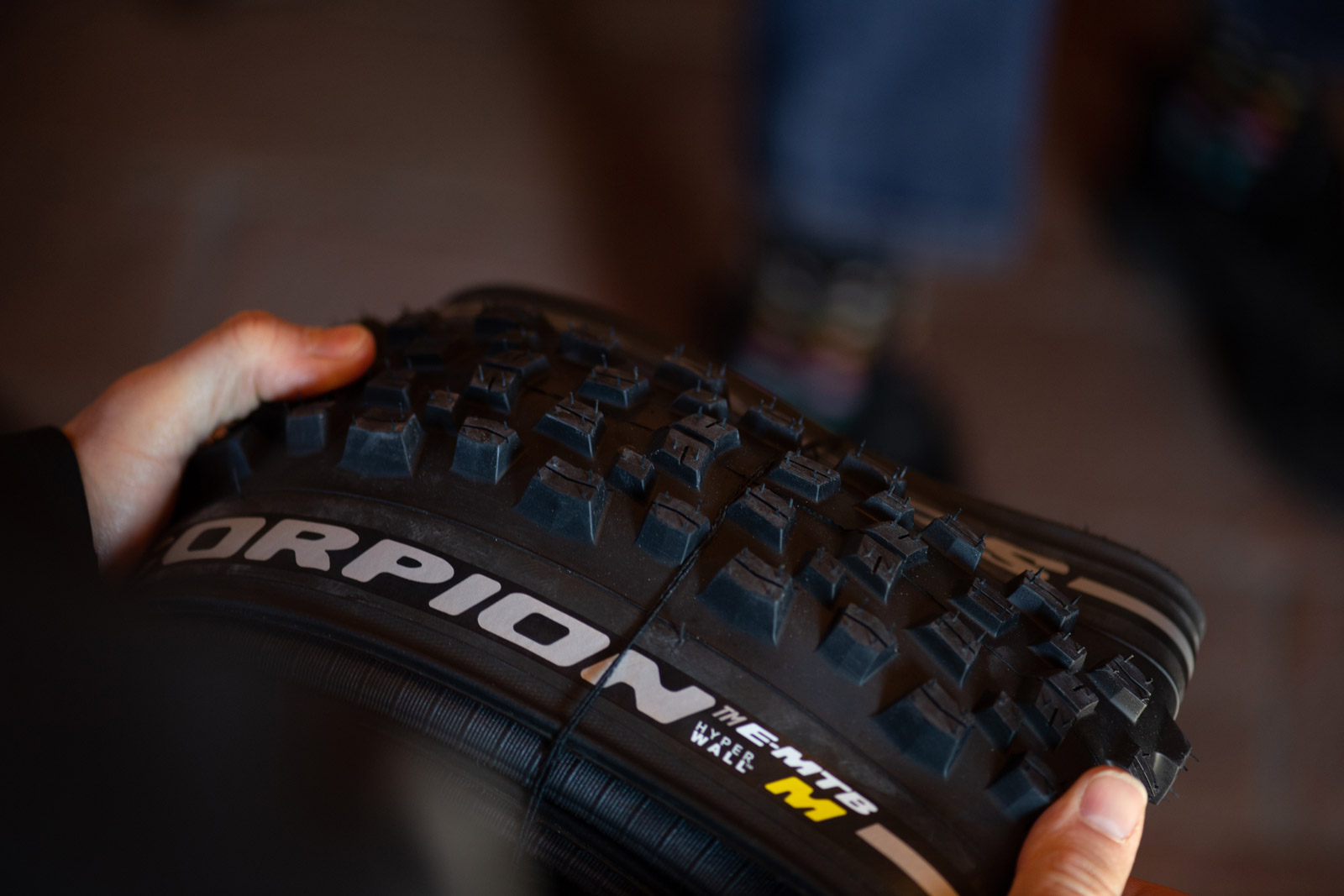 Pirelli pride themselves on that single-compound offering. That is to say, the same rubber with the same hardness properties runs right the way through the tread pattern area. So, as the tire wears down with use, its grip properties shouldn’t change much. This is not the case on some tires from other brands, such as Michelin, where the grip properties of their dual-compound tire option can change after the top, softer layer has worn down with use. 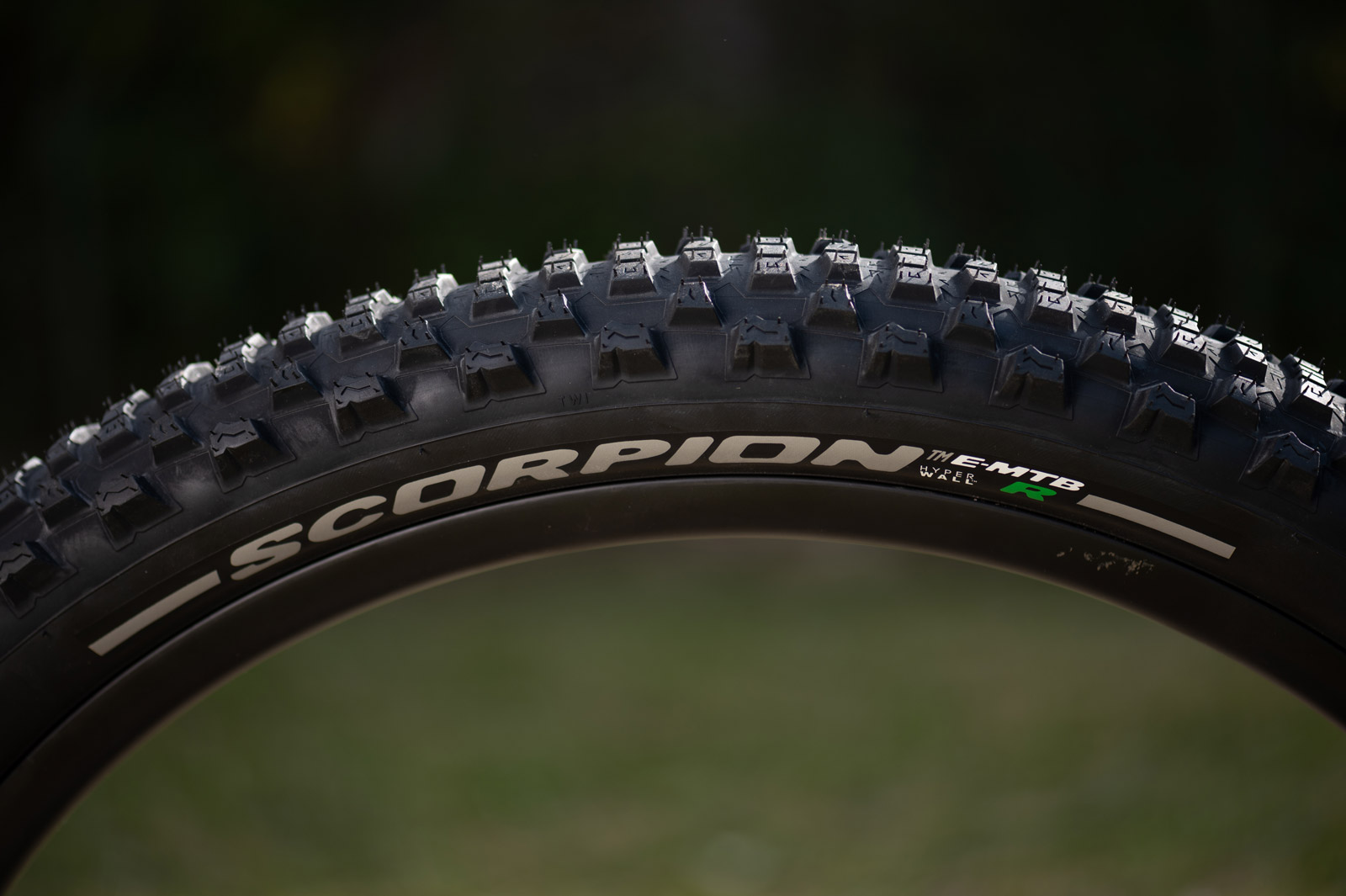 The final notable update for the Pirelli Scorpion Enduro tires is the addition of an intermediate casing construction called ProWALL. In terms of weight and hardiness, this sits between Pirelli’s LITE Casing seen only on the XC and Trail tires, and the HardWALL casing seen the Enduro Tires only. Claimed weight for the 29″ x 2.4″ ProWALL is 950g, a good 150g lighter than the comparable HardWALL option. 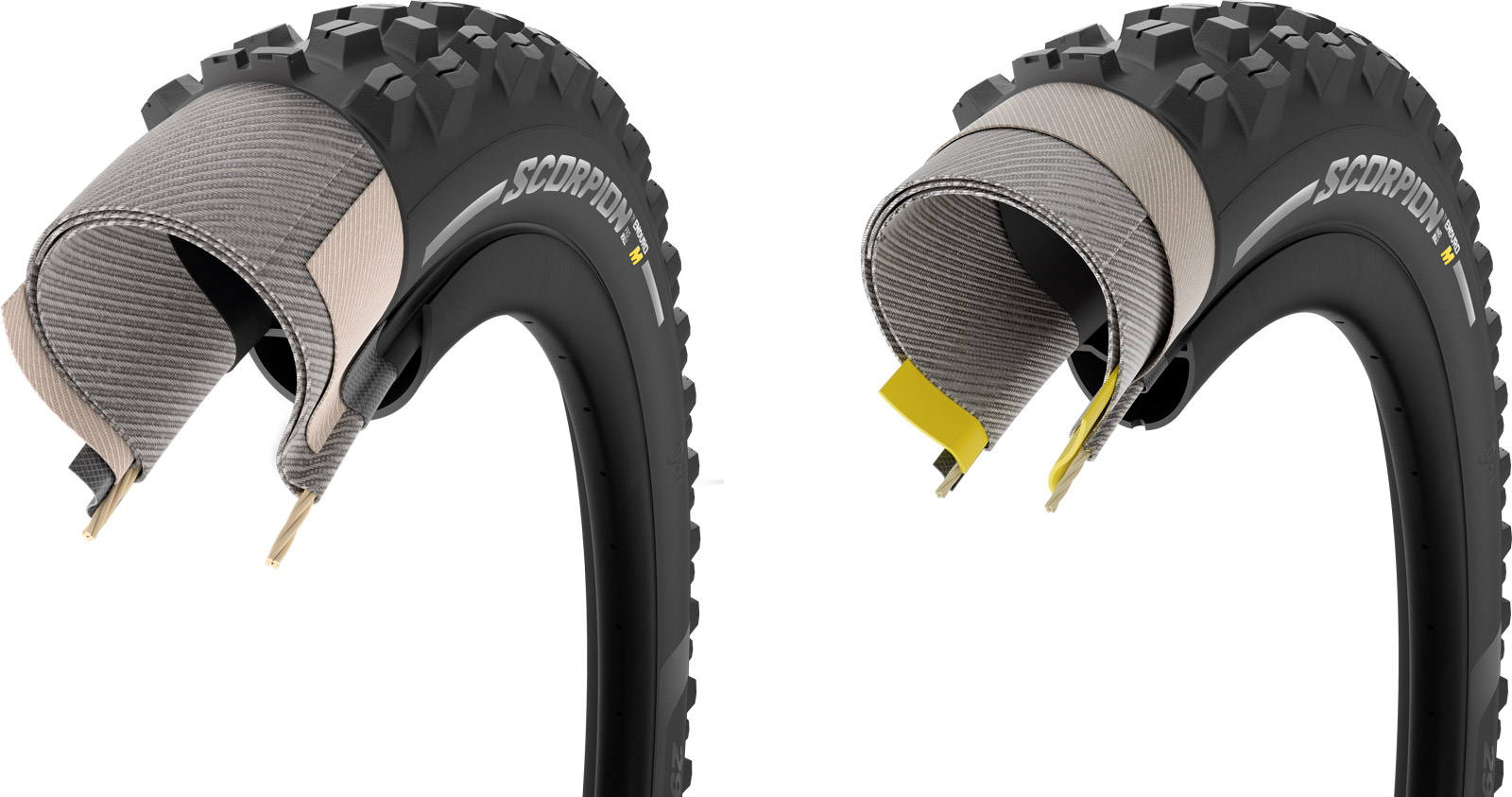 Whereas the HardWALL casing sees an extra layer of bead-to-bead protection, the new ProWALL offering gets that extra protection only at the sidewalls. It also lacks a rubber insert extending from the bead seen on the HardWALL casing, thus offers a little less sidewall stability and puncture protection, at the benefit of rotational weight. We see the ProWALL construction as a good option for use on the front tire, which doesn’t tend to receive quite so much abuse as a rear tire.

It is important to note that the Enduro ProWALL tires are constructed from a 60 TPI fabric, whereas the Trail ProWALL tires that have been around much longer get a more supple casing made up of a 120 TPI fabric.

Also new for 2022 is the introduction of the new HyperWALL construction, specific to the Scorpion eMTB line. The idea here was to produce a casing that would be able to tolerate the higher mileage, greater torque and higher loads associated with eMTB riding, combined with a level of reliability comparable to full-blown DH casings, but in a lighter weight package. 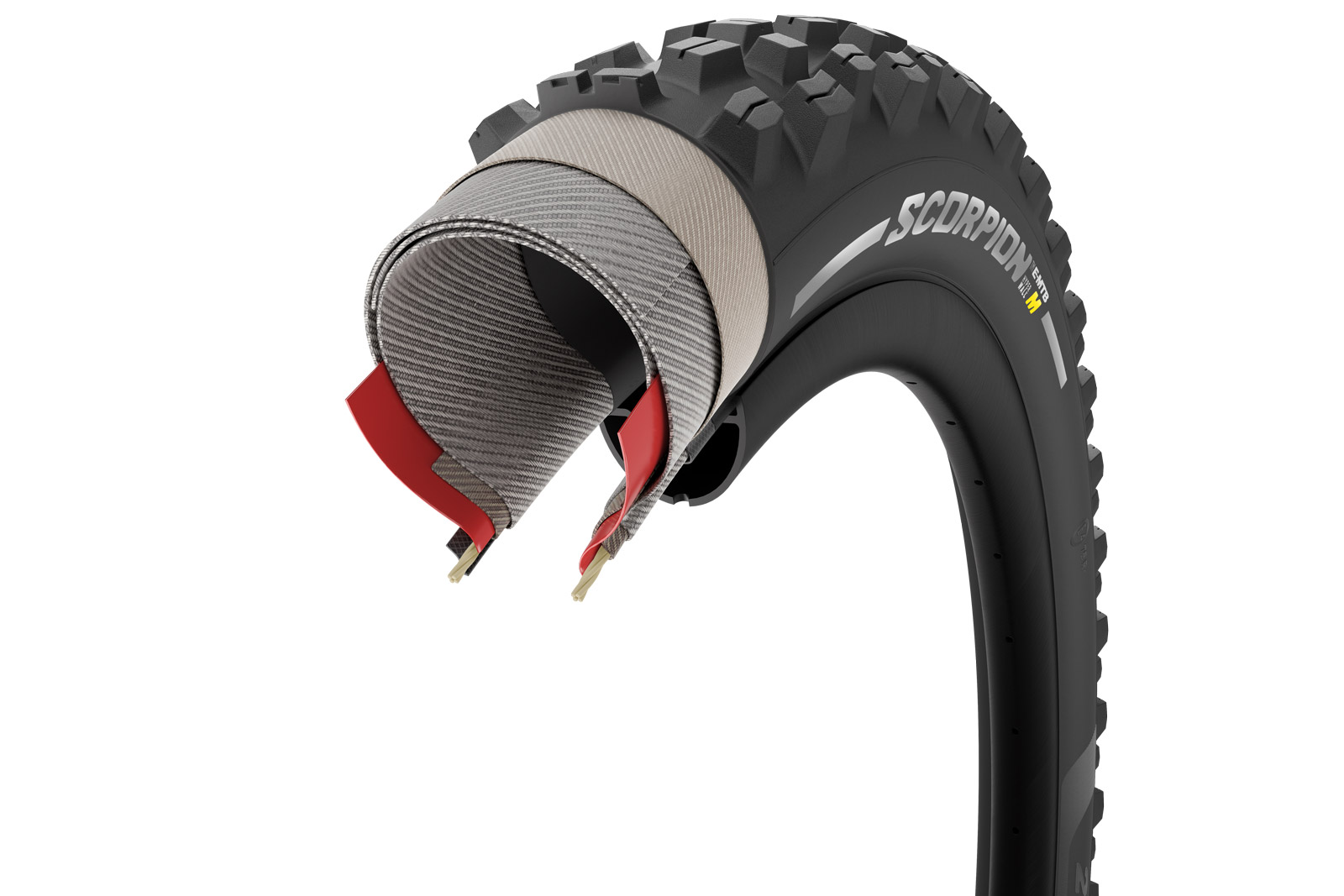 The HyperWALL is similar to the HardWALL casing in that it gets that extra layer of bead-to-bead protection. Additionally, it has a much taller insert at the sidewall that extends stability further up the sidewall to a location just south of the tread pattern area. This is great for preventing tire roll in fast corners, but it does mean more of the forces are directed down to the tire-rim interface. To combat those forces and prevent burping, Pirelli add a “bead flipper” to the area. This is a woven nylon insert that reinforces the bead also increases protection against pinch flat punctures.

Altogether, Pirelli claim the HyperWALL tire construction offers the reliability of a downhill casing tire, with characteristics that allow it to be run at lower pressures. We can see uses for the HyperWALL construction outside of eMTB riding but, for the moment, Pirelli are only pushing it for eBikes.

In comparison to the previous casing seen on Pirelli’s eMTB tires, the new HyperWALL construction is said to offer 10% improved bead stability, 5% improved pinch-puncture protection, 25% better handling at lower pressures (based on blind field testing), and higher strength against side wall cuts.

Note: We are double checking the claimed weight of the Scorpion Enduro M 20″ x 2.6″ HardWALL option, and will report back ASAP.

UK Pricing is as follows: