On the eve of the time trial Grand Départ of the 2022 Tour de France, Pinarello says the new Bolide F is their “fastest bike ever”. The slippery-looking, signature curvy Bolide F will be the TT bike of choice for the INEOS Grenadiers team this weekend, including World time trial champion Filippo Ganna and his GC team leader Geraint Thomas. Will it be enough to catapult an INEOS rider into the maillot jaune from the start? 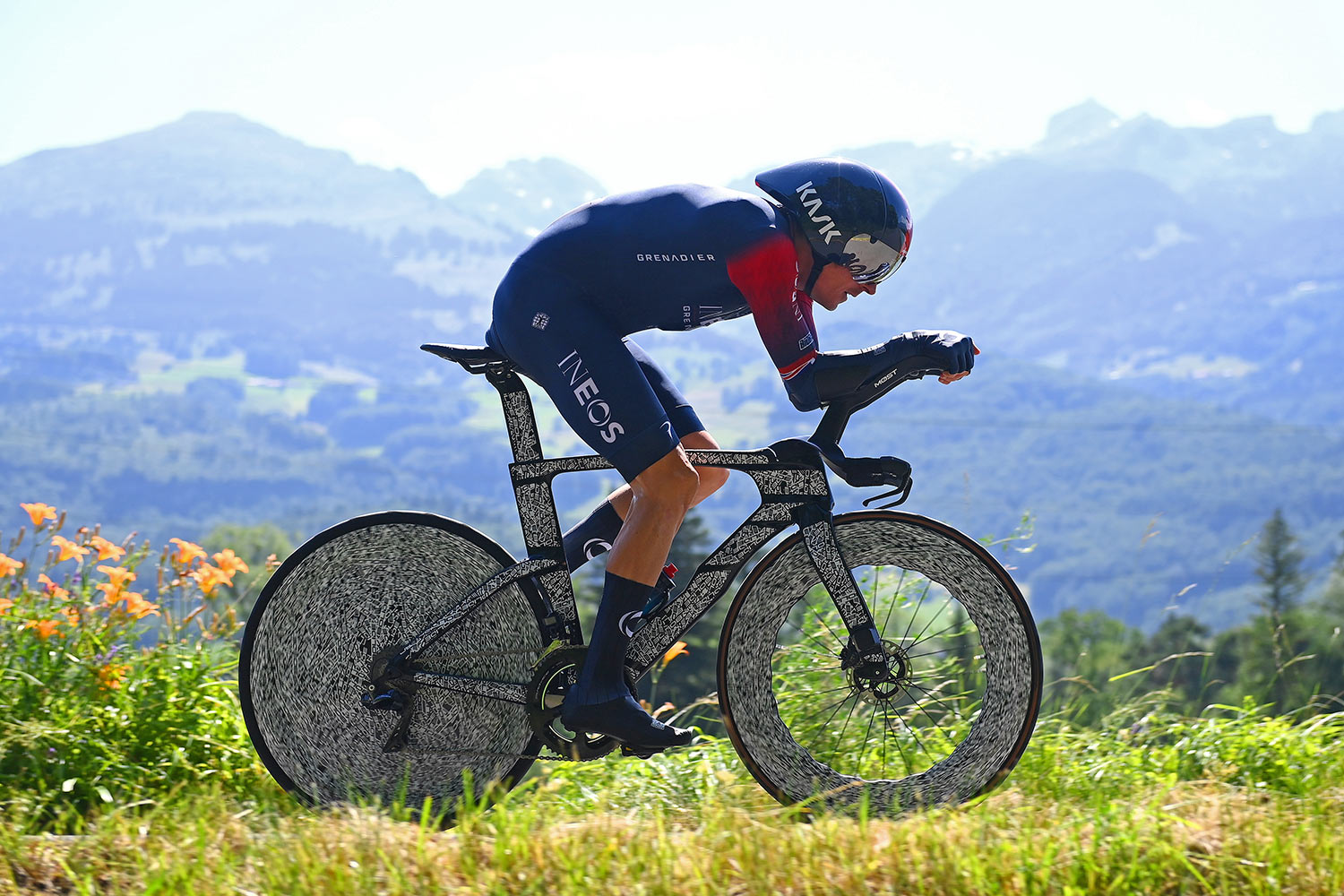 The team has already had some good results at the recent Tour de Suisse & Ganna just won an Italian TT national championship on a camouflaged version of the new Pinarello Bolide F. But Copenhagen will see its first official unveiling.

The new bike doesn’t look entirely unfamiliar, as it is the natural evolution of the Bolide TR we’ve seen since around 2018, although mostly in triathlon or even track variants. But that’s where Pinarello has been refining the aerodynamic performance of this platform, and they say it’s well… faster than ever now. 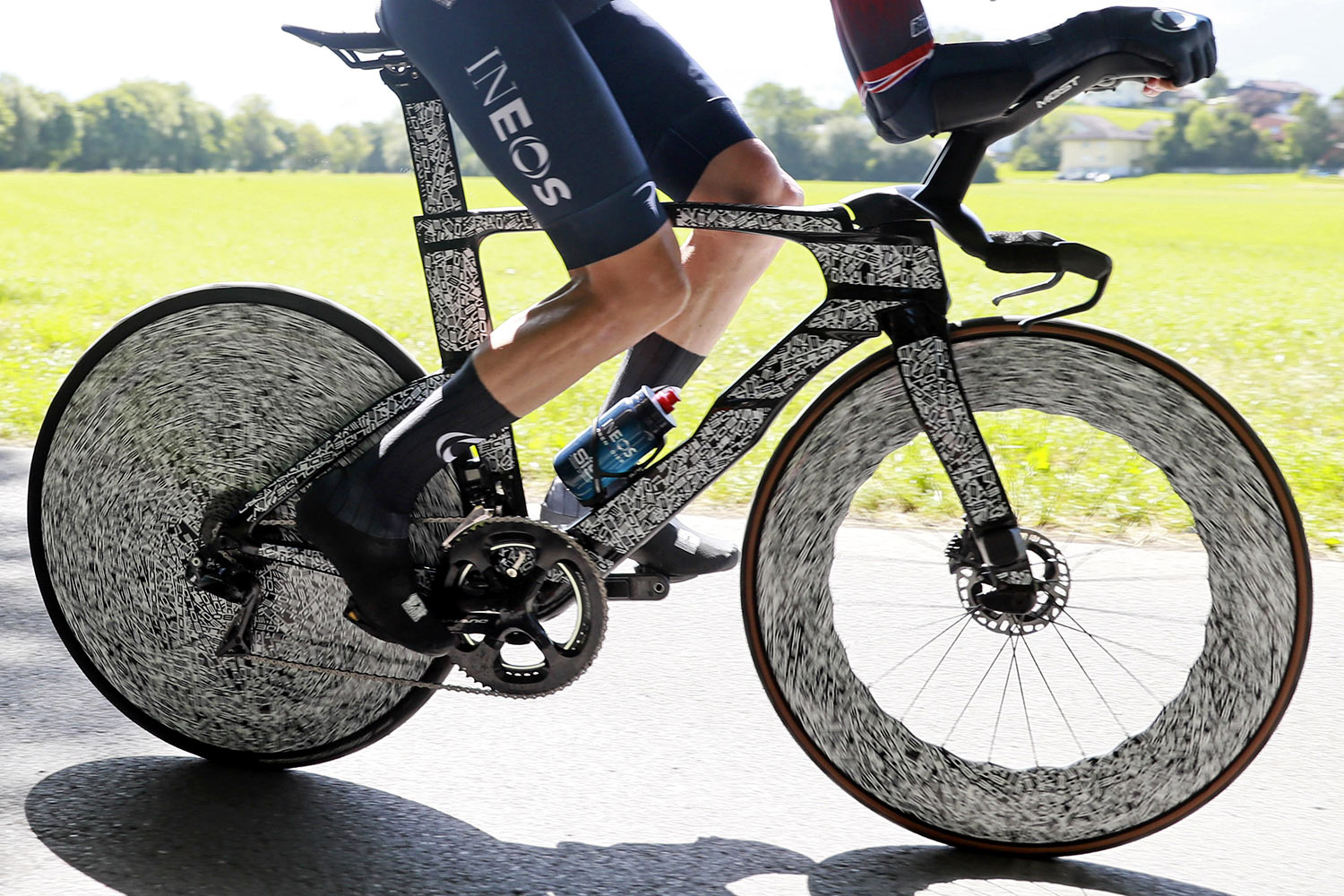 Boosting speed wasn’t only decreasing drag, but also decreasing rolling resistance. In fact, adding disc brakes in CFD increased drag by 1.4% over the old rim brake version. Then, bigger tires meant more frontal area. But they clawed that back by reshaping the rear end with new dropped seatstays, a cleaner seat cluster, and refined chainstays. Interestingly not claiming there is less frame drag than before but that it is “within 0.04% (0.0075N) of the previous Bolide TT”. Instead, the bike is faster combining aerodynamics & rolling resistance, plus improved disc braking control. 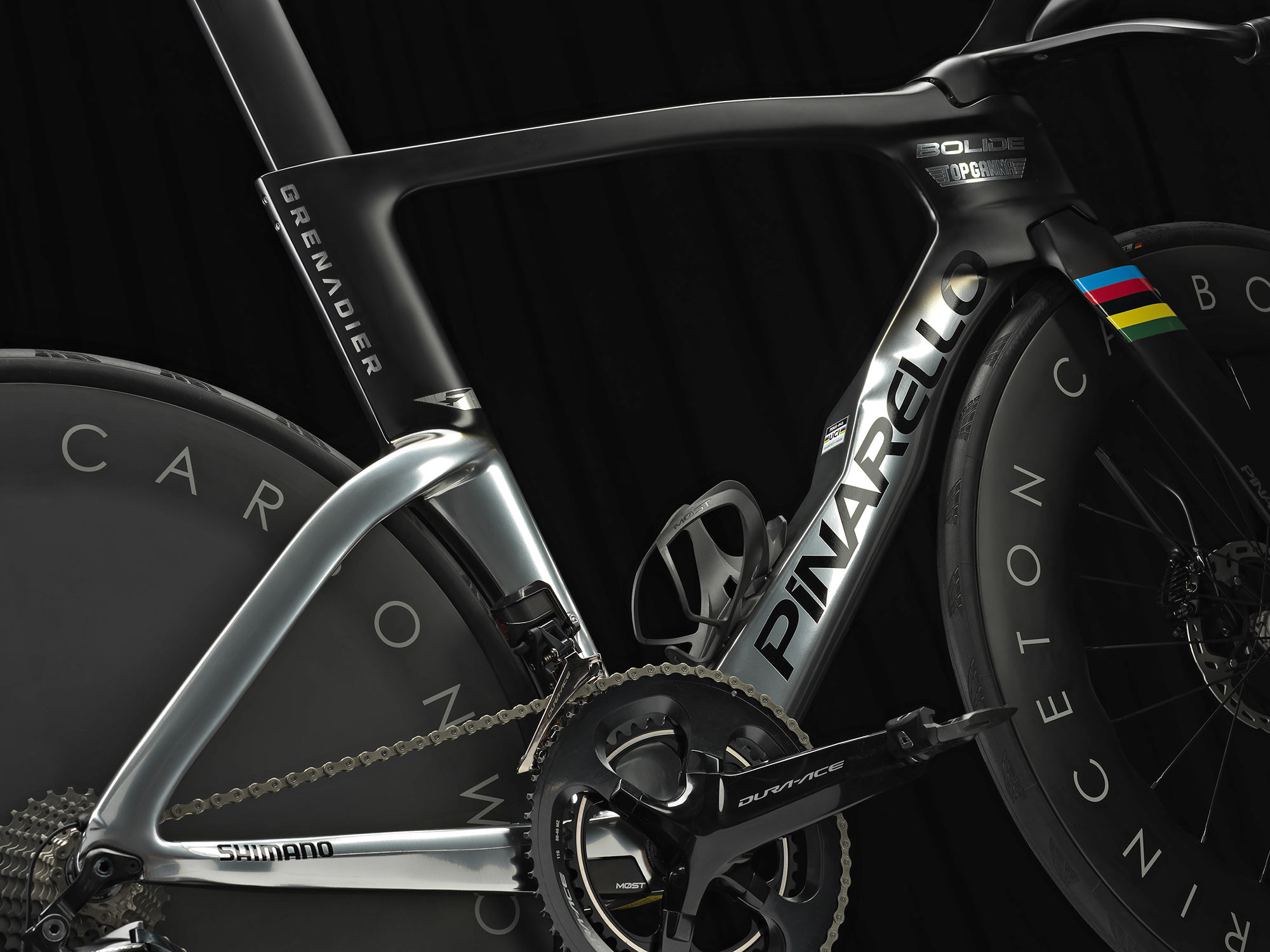 In the end, it also looks like the rear lost a lot of that signature Pinarello wavy shaping, in favor of better aerodynamics. 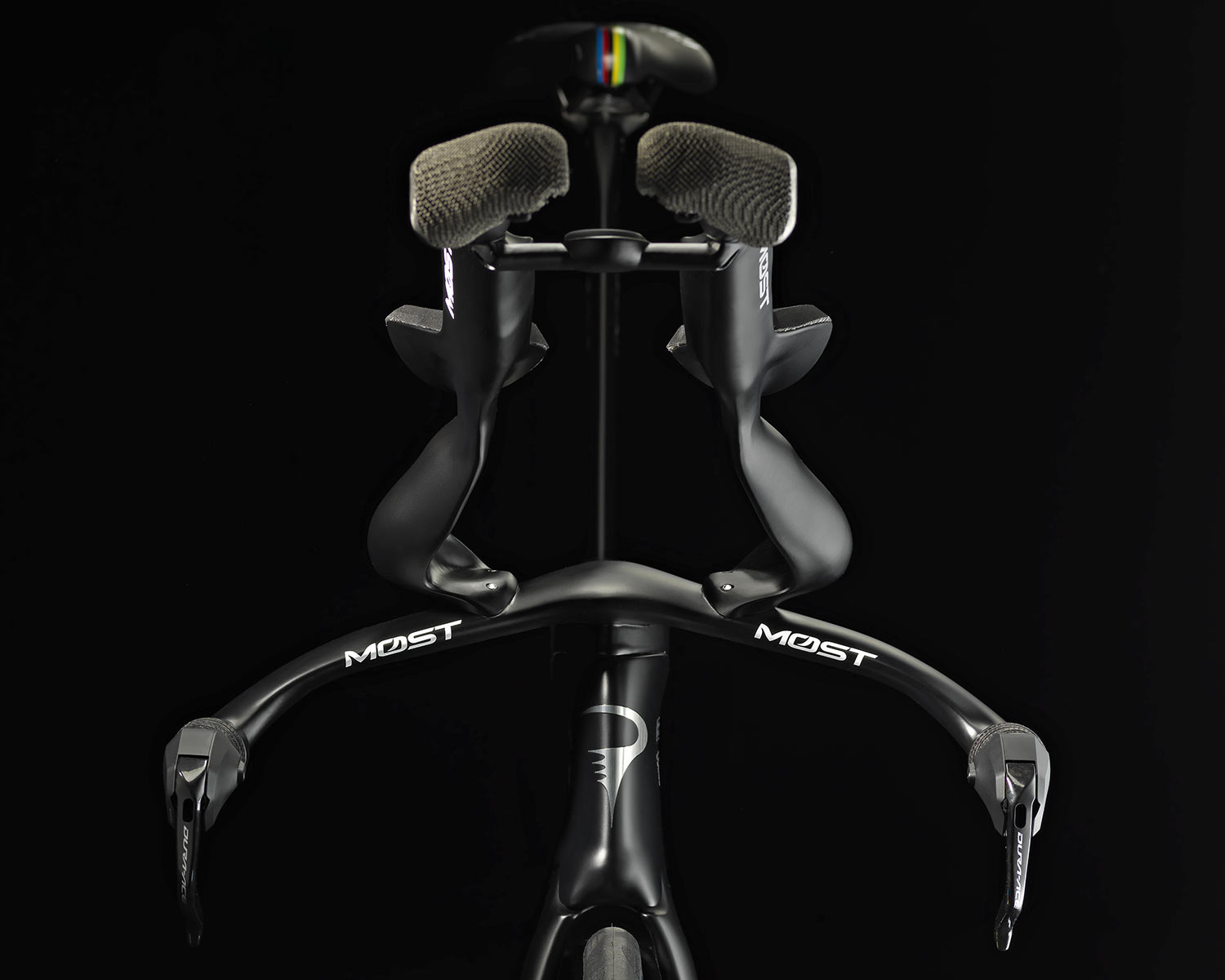 Up front though, drag is reduced, thanks to the new aero basebar & aero extensions, claiming a 2-3% improvement over total drag. Pinarello pros get even more gains than that with custom 3D-printed titanium aero extensions. But now amateur cyclists (with sufficiently fat pocketbooks) can get the same pro custom treatment too, scanning their forearms in the UK or Italy to perfectly form the ultimate aero fit. 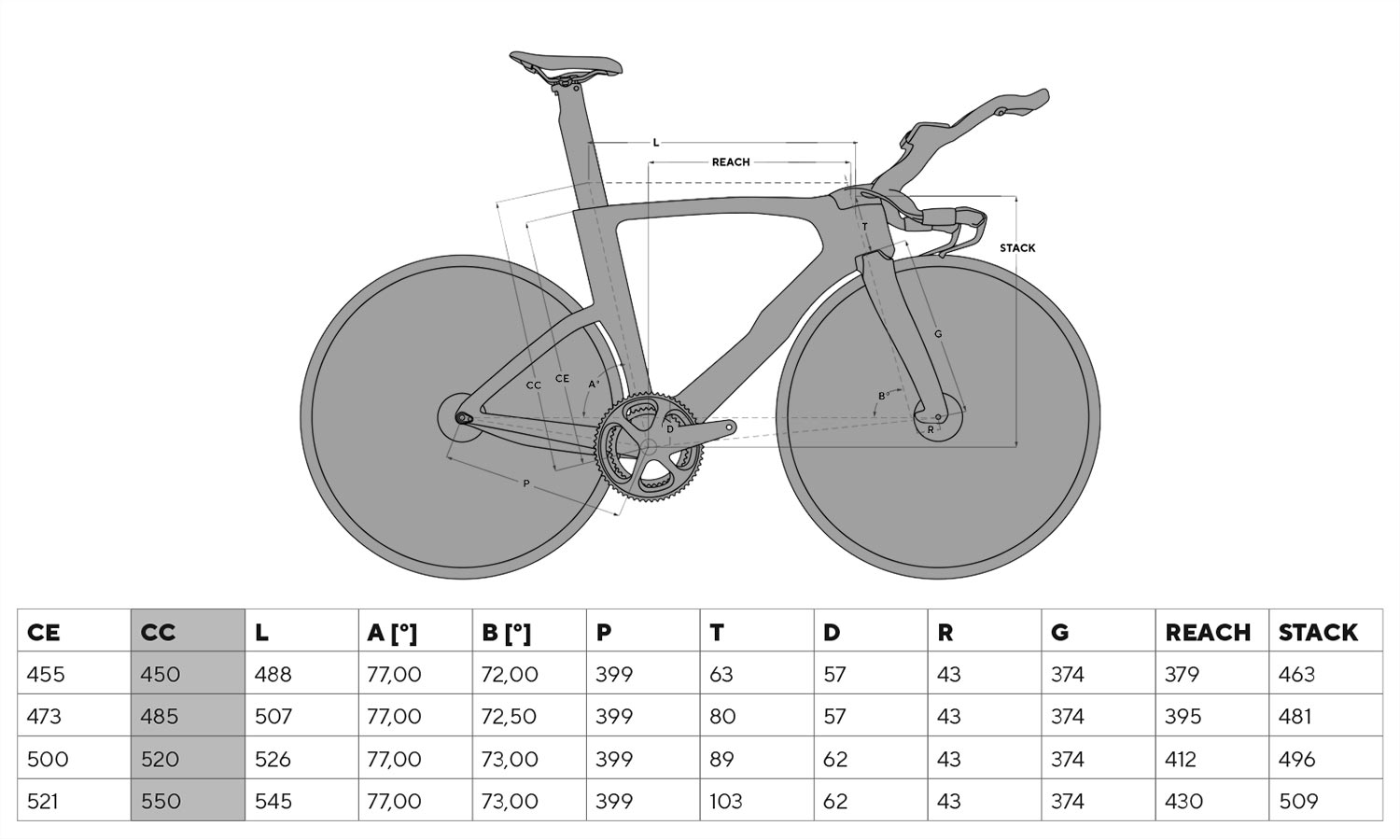 The new Pinarello Bolide F is also lighter. While no super light climber, Pinarello was able to shave 170g off the frame kit (including its brakes). Now the complete Bolide F TT disc brake frame kit comes down to a claimed 2265g for the largest size, including frame, fork, headset, seatpost, disc brake calipers & hydraulic lines. The raw frame alone is just 1100g. 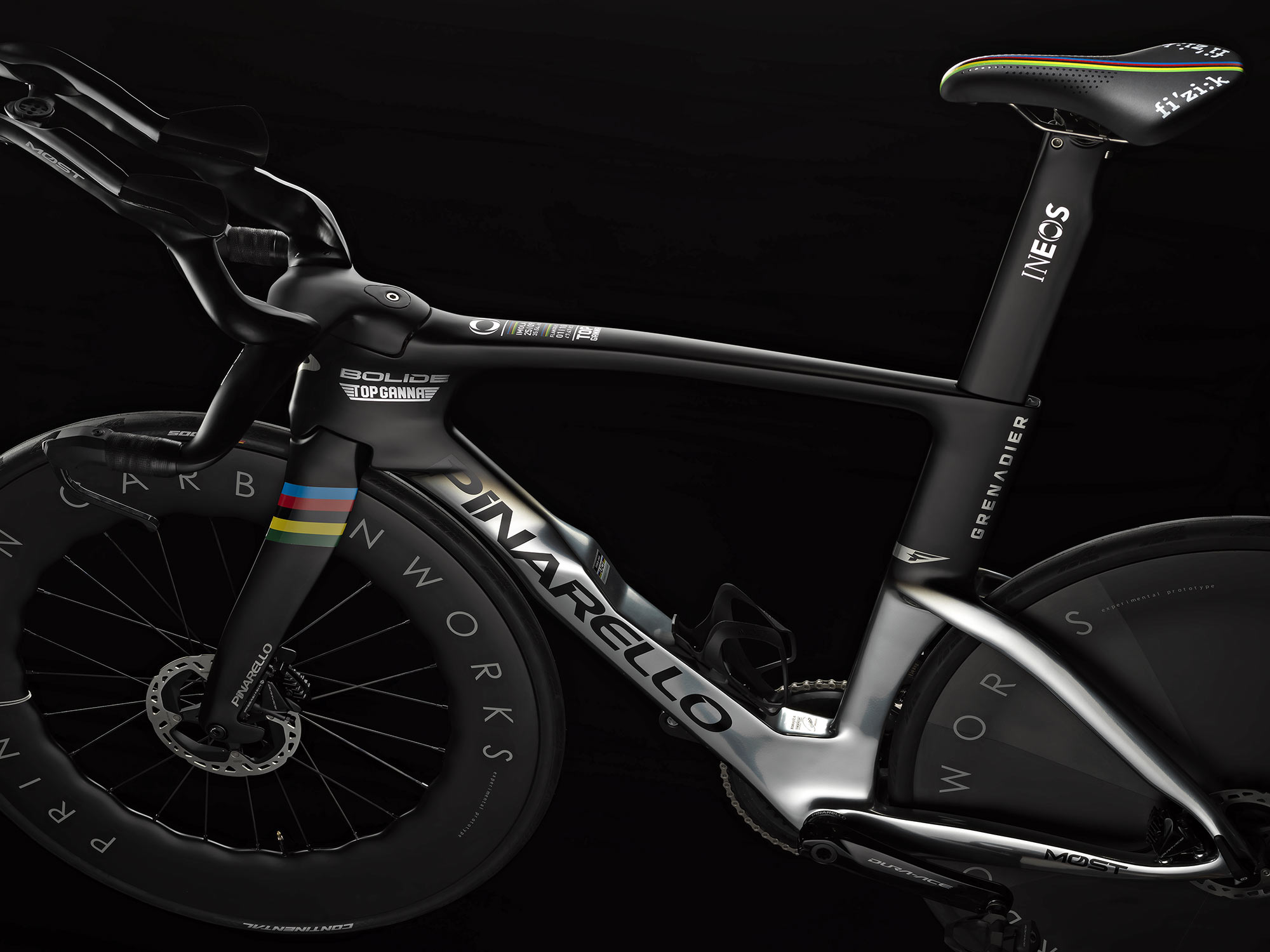 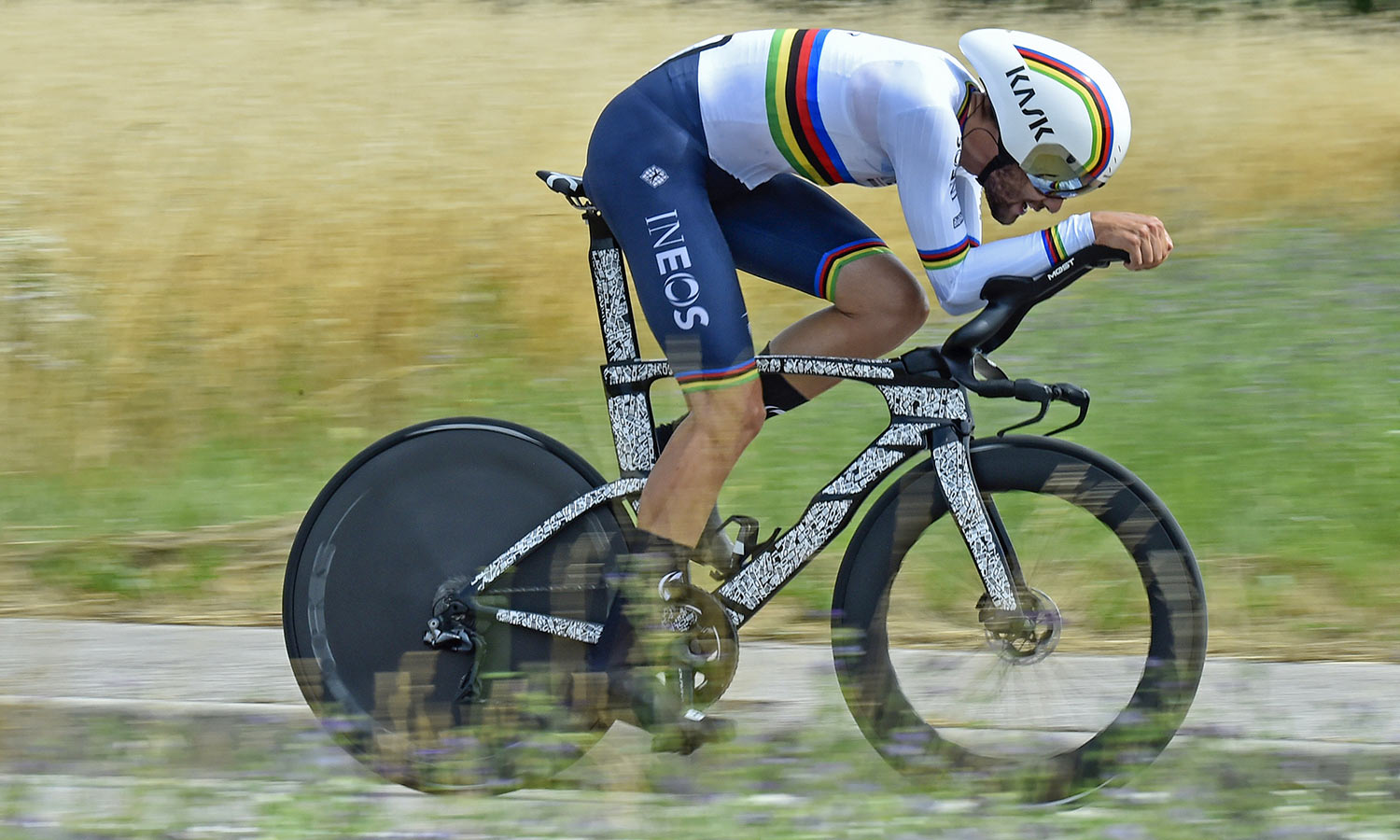 All of the improvements are said to be really noticeable while racing… faster on the flats, quicker out of the corners, and more composed handling overall. 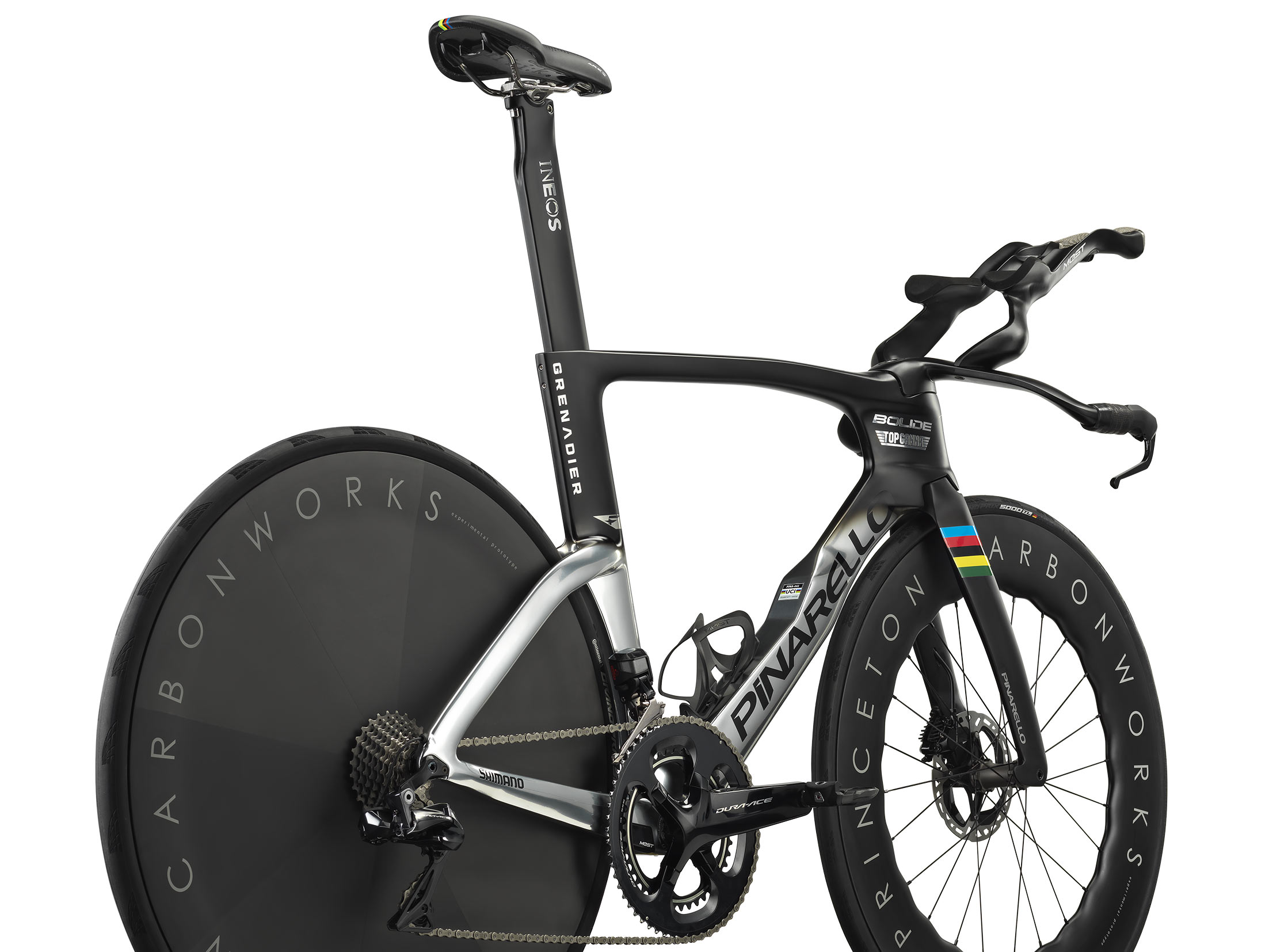 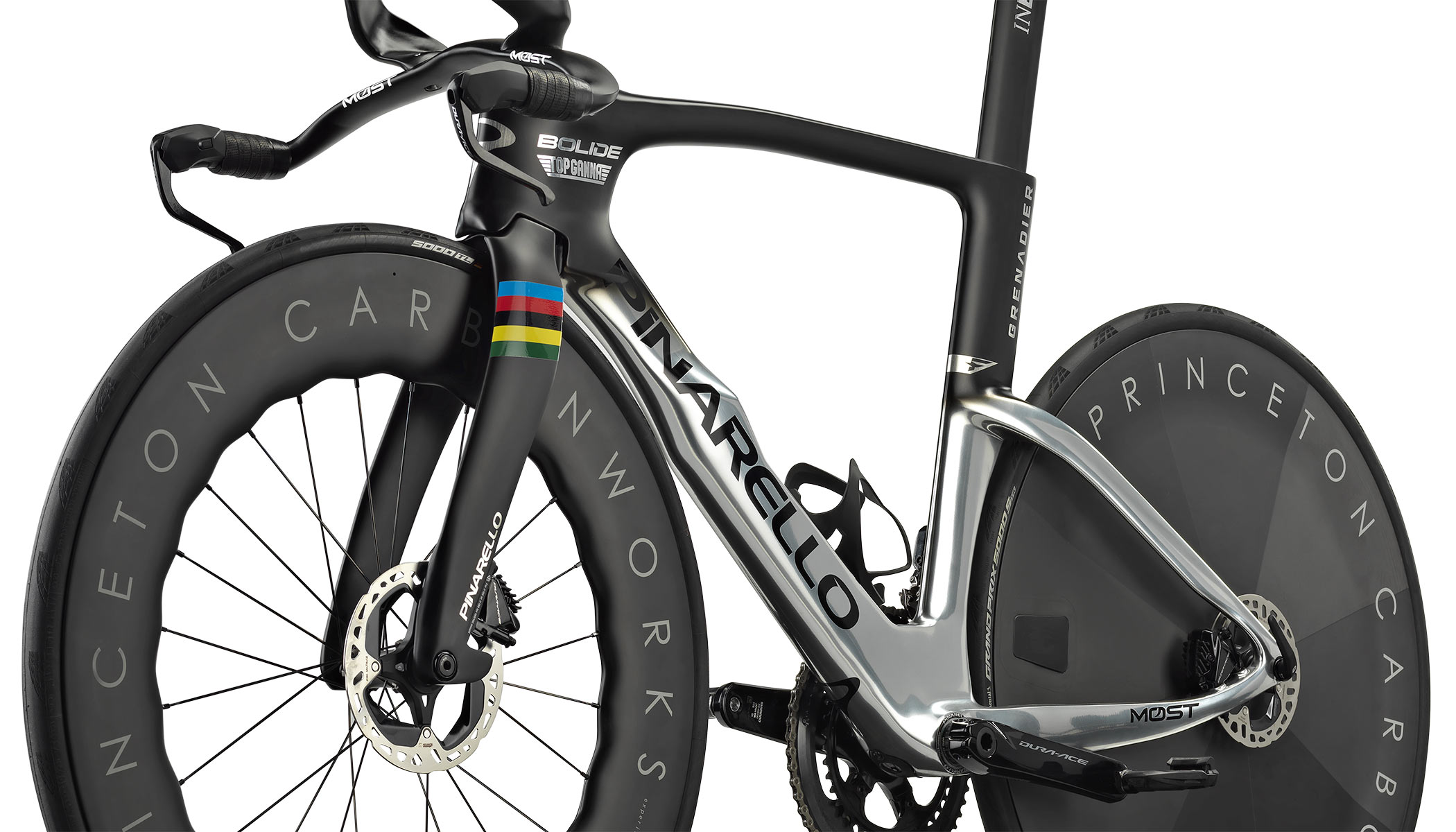 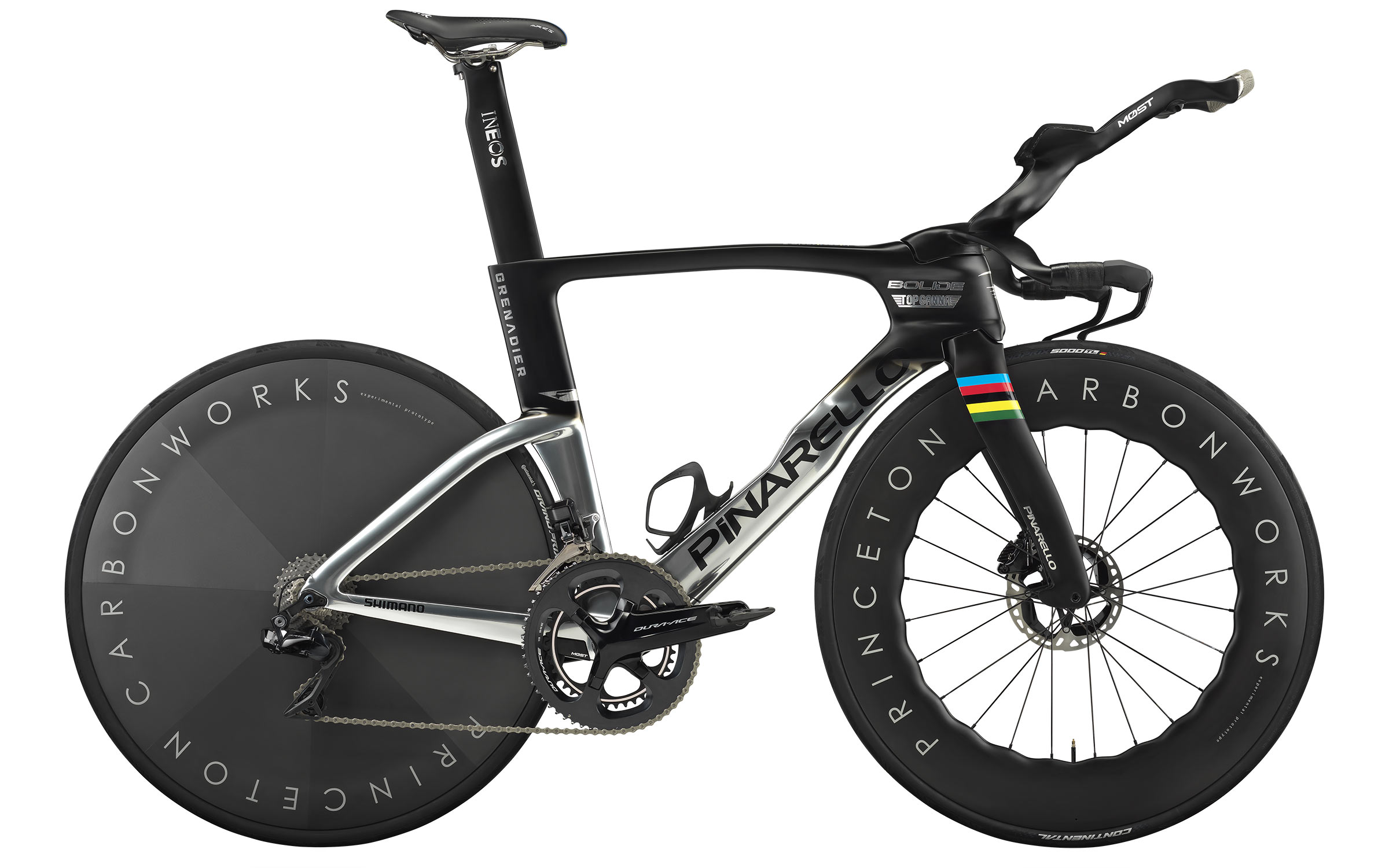 The new Pinarello Bolide F is technically already available for pre-order from your local dealer in four stock sizes, although no word how much it will actually cost or when it will show up in the bike shop. We do know that you won’t be able to get the World Champ rainbow strip Top Gun Top Ganna edition… that one is reserved for Filippo Ganna. Consumer bikes will be matte black with white Pinarello decals.