For the past two decades, I have attended the Western States 100 as a participant, spectator, volunteer, and coach. My experience this year, particularly as a coach, was one of the most meaningful and fulfilling Western States days of my life, and one which I will not soon forget.

For the 2022 race, I had the honor and privilege of coaching eight athletes. These athletes came from places dotted all across the United States and came into the event with a wide variety of experience. There were some first-time 100 millers as well as former Grand Slam of Ultrarunning finishers.

The eight stories that emerged that day were anxiety-producing, triumphant, heartbreaking, and inspiring. Over the months leading up to the race, the group began to refer to themselves in emails and text threads as “AJW’s Western States Class of 2022.” And so here, in finishing order, are the stories of this class of 2022. 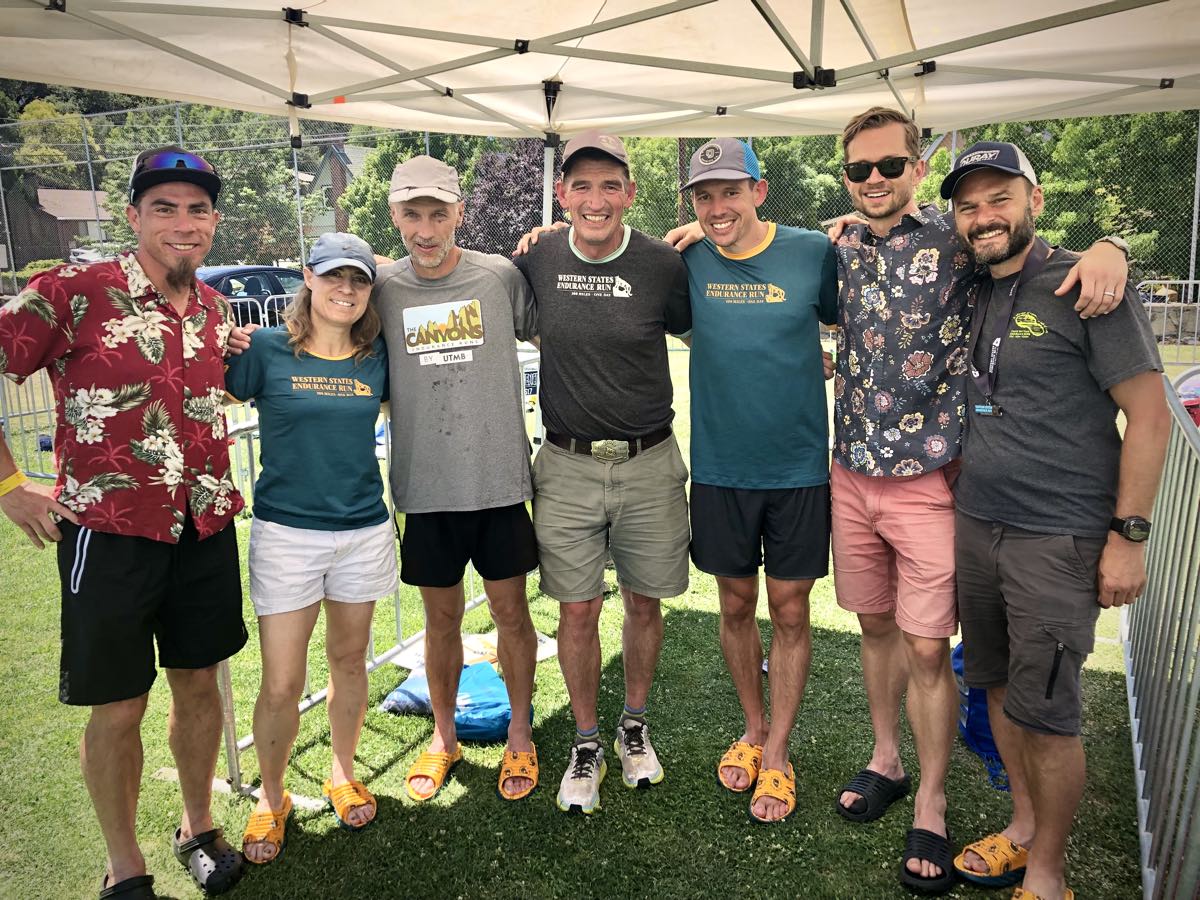 Matt Marino is a successful finance professional from Seattle, Washington. A family man, Matt was supported at the race by his incredible wife, Sarah, as well as a contingent of family and friends. This was Matt’s first 100 miller and he set for himself an ambitious goal of sub-20 hours. His preparation was spot on, and he created for himself one of the most sophisticated and detailed race plans I had ever seen. In the end, he finished a bit slower than his goal in 20:43, good enough for 34th place overall. Running smart all day, Matt managed the heat with his homemade ice hat and stayed dialed on nutrition through every turn.

Brittany Peterson is an occupational therapy instructor from Pocatello, Idaho. Having finished Western States two other times, in second place and fourth place, she had high hopes for the day. However, a few days before the race, she developed an absolutely miserable cold. She tested for COVID-19 three times per day for three days before the race, and came up negative each time. Ultimately, she decided to start the race, knowing that she would be far from her best. Supported by a rock star crew, Brittany fought the desire to quit at each aid station and came perilously close to giving up when I saw her at Michigan Bluff, at mile 55. But, like a champ, she resisted the DNF pull, dragged herself out of the chair, and proceeded the rest of the way to Auburn, finishing as 16th woman in a time of 22:16. 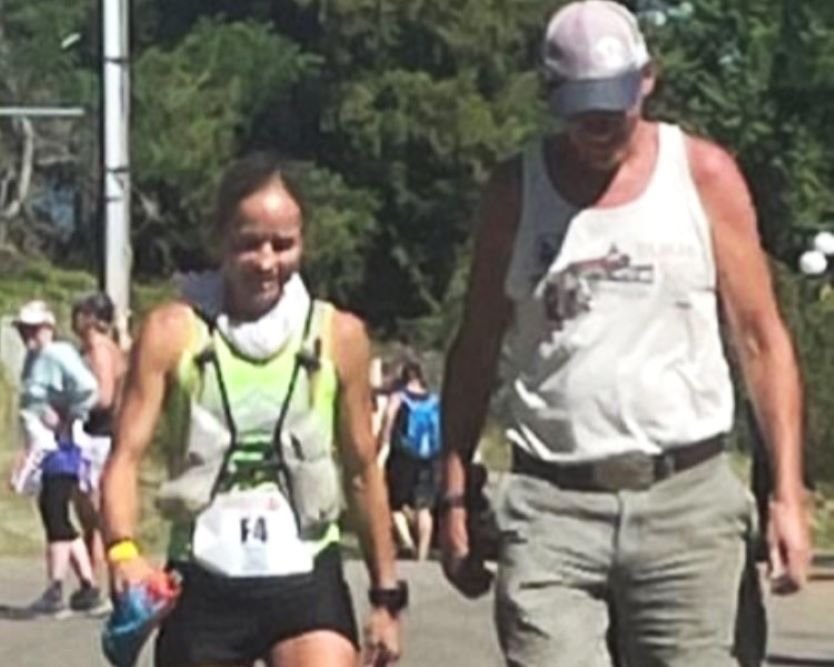 Brittany Peterson and AJW at the 2022 Western States 100. Photo courtesy of Peterson’s crew.

Tom Rauen is an entrepreneur from Dubuque, Iowa. Supported by his wife, Amanda, and their two kids, Tom was running his first Western States and, like Matt, was hoping for a sub-20-hour finish. Running smart and disciplined through the high country, he was on that pace through Robinson Flat at mile 30. However, as the heat of the day set in for Tom through the canyons, Western States’ notorious stomach gremlins began to make their presence felt. After emptying his stomach a mile after Devil’s Thumb, he traversed El Dorado Canyon on fumes. A smart 15-minute stop at Michigan Bluff at mile 55 to reset and refuel meant his sub-20 goal was gone, but his will and focus to finish were not. With the reset button pushed, he ran a strong second half to finish in 22:39.

Dario Zea is a proud Peruvian/American from the San Francisco Bay Area. Supported by his wife, Marianne, and their daughter, Dario came into the race with silver-buckle fever. While he knew it would be tight, he wanted to go for a sub-24-hour finish. And go for it he did! While he struggled a bit with the altitude in the high country, as he emerged into the canyons he remained on track. By the time I saw him at Michigan Bluff, he was focused and disciplined, spending just one minute at the aid station. An hour later, I got a text from fellow CTS coach Jason Koop, who was stationed at Foresthill at mile 62. “I just ran a few minutes with Dario down to Cal Street. Holy crap, he is running great!” A smile crept onto my face at the moment, with the thought of Dario receiving his silver buckle. And he did so with 10 minutes to spare, finishing his first Western States in 23:50.

Gina Harcrow is an executive with Verizon from Monument, Colorado. Supported by her husband, Harryhimself an eight-time Leadville 100 Mile finisher, and their four kids, Gina was the most experienced of the class of 2022, having done the Grand Slam back in 2017, as well as a dozen or so other 100 milers. Gina is unapologetically old school, and ran the race like a pro, keeping herself cool, eating robustly from the aid-station tables, and making quick time at the aid stations. In the end, she made it to the finish line in 27:16, and reflecting on the race a day later, she told me, “I don’t know if I’ve ever felt more grateful for the gifts I’ve been given in my life and the ability to do this than on the day after getting to that finish line.”

Theo Wirth is recently retired and comes from Roseville, California. The father of three delightful daughters, who were all on hand to support him, his crew chief was his wife, Claudia. Being of German descent, Theo was characteristically meticulous in his training and race planning. But alas, even the best-laid plans can go astray at Western States. When he limped into Michigan Bluff about two hours later than he planned, he looked at me and said, “I don’t know why but my quads are totally shot.” It was a down moment for sure but after a five-minute pity party, just like Brittany a couple of hours ahead of him, Theo got out of the chair and made his way relentlessly forward to the Auburn finish line, finishing at 27:30 .

Andrew Messina is a tech bro from the flatlands of Red Bank, New Jersey. Coming to the race with no crew — he took an Uber from the Sacramento Airport to the start line in Olympic Valley — and with a pacer he found on the internet, Andrew was my minimalist guy. He had drop bags scattered across the course and I dare say when I saw him at Michigan Bluff, a notoriously difficult place at which to look good, he looked like he had just finished his morning three-mile jog. He was focused and totally saving the entire experience. After his finish in 28:19, he was joyful and buoyant, saying, “I gotta tell you, that was an awesome experience, the best finish of my life.”

And finally, there is Danna Baxley. Gaining entry to Western States via the lottery, Danna wanted nothing more than to finish the race. Danna lives in Kentucky and has a high-stress job with The Nature Conservancy. But, in spite of that, or maybe because of that, she endured, never missed a workout, and arrived at Olympic Valley in the best shape of her life. She ran smart all day, taking care of herself and making good decisions until abruptly the clock ran out on her a couple of hundred yards below Robie Point, 98.5 miles into the race. Danna covered those miles with determination and grit, and while she didn’t head back to Kentucky with a buckle, she did return home with the knowledge and understanding that life has all kinds of finish lines on all manner of tracks and that the next time she’ll make it to that track, wherever that track may be. 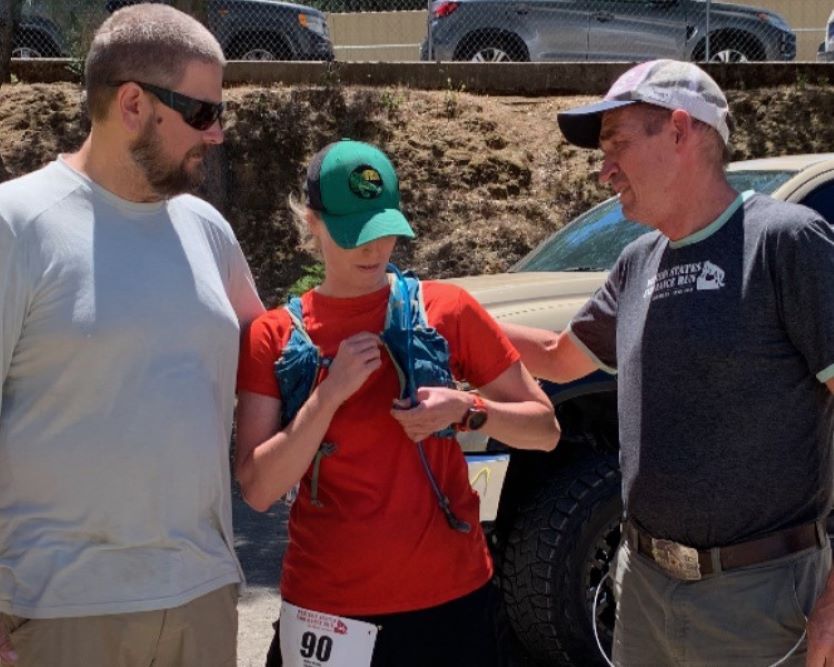 AJW with Danna Baxley and her partner, Jay, at the 2022 Western States 100. Photo: Wendy Baxley

AJW’s Beer of the Week

This week’s Beer of the Week comes from the Knee Deep Brewing Company located a few miles from the Placer High School track in Auburn, California. Known for their hoppy IPAs, Knee Deep also makes some yummy alternative beers. One of my favorites is their Tanilla, a Vanilla Porter brewed with all-natural vanilla beans and smoked to perfection. As far as flavored porters go, this is one of the best I’ve ever had!

What are some of your favorite stories from this year’s Western States 100?