When a group of Texas-based Latinas met during a summer ultrarunning Bexar Tracks training program through the San Antonio Running Company, the trio could not stop laughing out on the trail. They became inseparable friends and ultimately launched the Ultra Reinas group to help increase the visibility of Latina ultrarunners in the broader community, sport, and industry.

“We’re not the fastest but we have the most fun,” said 33-year-old Michela Lara, cofounder of the Ultra Reinas Latina ultrarunning group. “Reinas” means “queens” in Spanish.

The other two founders are Jess Sánchez and Marisol Treviño Gutierrez (also known as Sol). “The majority that participate in this sport are caucasian. I don’t think I’ve seen a professional ultrarunner who is Latina. We want to create visibility to us and the people of our community,” said Lara.

Beyond the group’s mission to increase diversity and representation in the sport, they aim to destigmatize self-care in the Latina community.

“All of us are Latina, and in our culture, it can be called selfish if you do your self-care, so this is our way of being representative of our community and being a part of different communities as well,” Lara explained. More specific to their geographic origin, they are Tejana, given that they are of the Mexican culture and in the state of Texas, close to Mexico. “Either your family crossed the border, or the border crossed you,” explained Lara of the historical fluidity of both people and the international border in the region.

The group also focuses on amplifying female potential through joining the ultrarunning community. Lara said, “Amber and Sol are both moms. It’s really important to show that moms can also participate in this sport. You do need a super amazing support system — which they have, in their husbands — but it’s doable.”

The Alamo City Ultra: Where the Ultra Reinas Began

When the trio of trail runners met at the 2018 shop meetup, the experience was their first-ever group trail run and inaugural ultrarunning training program. The sessions were hosted and training plans were provided for the local Alamo City Ultra trail race. The women jumped on board for their debut ultra training cycle together. The Alamo City Ultra became Lara’s first ultra and it was Sánchez’s third ultra race. A few months later, the 2019 Bandera 50k was Gutierrez’s inaugural ultra distance.

“Our coach who was training us would run with us for our first few races we did together. He could tell when we were coming down the trail because he could hear us laughing. It was comical how we were on the trail when we’re running together, and a seed was planted into our heads that we should broadcast our lives a little bit — like a ‘Real Trail Runners of Bear County’ riff on the ‘Real Housewives’ ,’” said Lara. The following year, in 2019, they started an Instagram account @ultrareinas and YouTube channel Ultra Reinas to share some of their adventures. 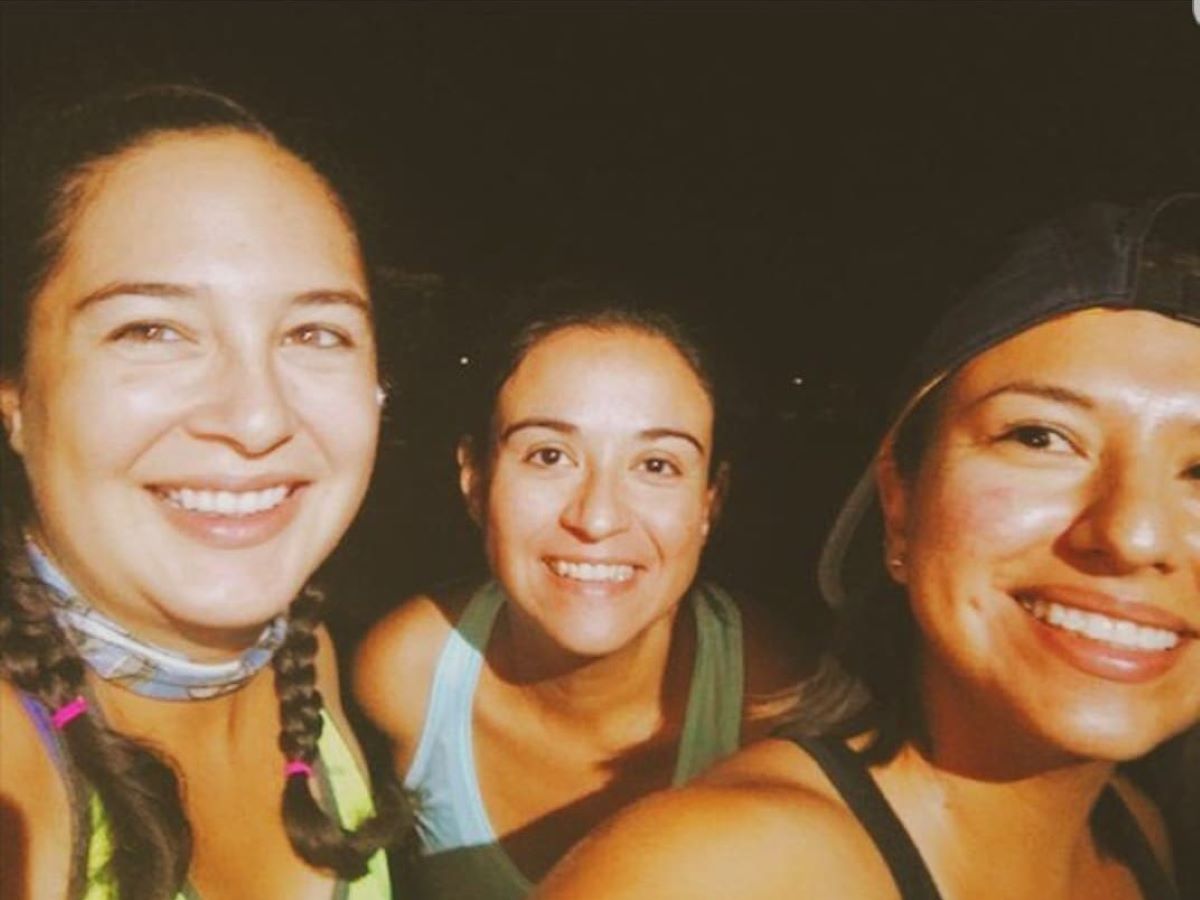 Left to right are Mechella Lara, Marisol Treviño Gutierrez (Sol), and Jess Sánchez, founders of Ultra Reinas, on the morning of the 2018 Alamo City Ultra.

Storytelling is one of their many passions in addition to their full-time jobs and families. Beyond a 9-to-5, Lara is co-owner of Chingona Race Productions, which hosts the first-ever (and sole) women’s only and LGBTQA+ bicycle tour in the state of Texas and the Southwest United States. She’s also an Orange Mud ambassador.

As a lifelong runner, Lara first started running as a kid while growing up in La Vernia, Texas, population 1,077. She raced middle school track followed by high school cross country in the two-mile distance. She ran cross country during college at the New Mexico Military Institute. A few back injuries several years ago kicked her off the running cycle for a while.

“Then I got back into running, and I really, really love trail running, because it’s so quiet — besides me giggling out there. You hear the birds, little squirrels, and hogs. I grew up in the Texas country, so when I moved into the city it was a complete culture shock for me. Going out every Saturday, at least, is a way I can un-city myself. I take it as a form of relaxation. It’s good for my physical health, amazing for my mental health, and I’m seeing my community, my girls. We talk about all sorts of things from aliens to kids to divorce to sexuality — everything under the sun. It’s amazing to have a group that is so loving, supportive, and great people,” said Lara. 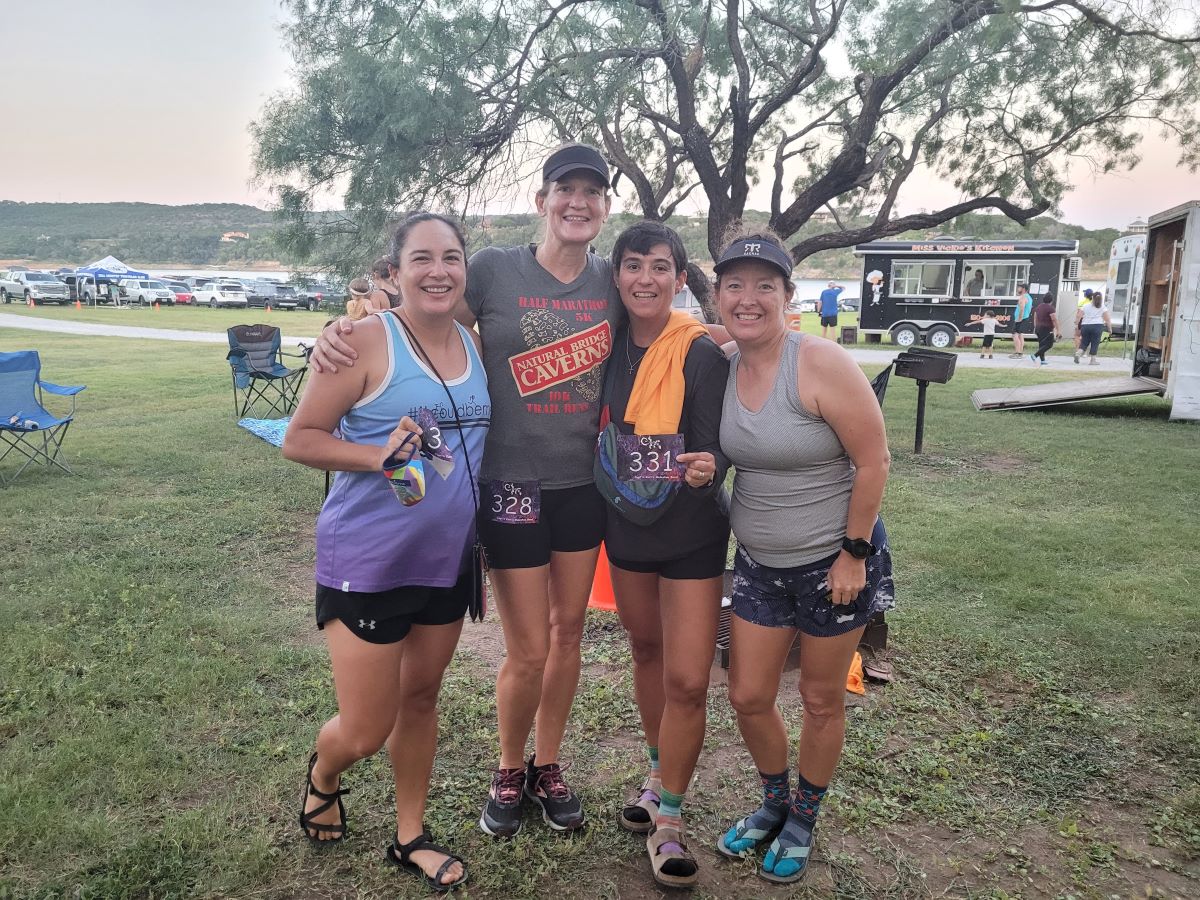 Sánchez, 38, is a holistic health coach, yoga instructor, and rabbit brand ambassador. She first started running at 30 years old, following her therapist’s recommendation that it would help improve her mental health, which “was the best decision ever,” she said.

“The trail running and ultrarunning community is really unique and pretty relaxed. I love the process: You go into your long distances knowing full well that it will be uncomfortable — and downright ugly at some points — and that you might not even finish the distance, yet you have to have faith in yourself and trust that it will be fun at the end,” said Sánchez.

Sánchez added, “I also really love that you have to be fully present the entire time. It’s a way to remind yourself that you are more resilient than you give yourself credit for. In a way, you’re faced with challenges you aren’t in your regular life, and it’s a nice reminder of what you’re capable of when all the comforts are removed.”

Gutierrez, 43, is a greenway trail steward for the City of San Antonio Parks and Recreation. She bikes 25 to 30 miles per shift on the greenway, making sure everyone is safe and the trails are in tip-top shape. She ran track in middle school, then later ran off and on throughout adulthood between having children, and experienced her first trail run at Joshua Tree National Park in 2017.

The idea to trail run was planted decades earlier by the opening scene of the film “The Silence of the Lambs,” Gutierrez said. “I saw Clarice running the trails at the beginning of the movie, and I wanted to do that so bad, but I didn’t know of any trails in my area, plus I was 12 years old and couldn’t drive!”

After meeting the Ultra Reinas ladies, she simultaneously found solitude through trail running in San Antonio.

“I love being in the wilderness by myself, getting out of my brain, focusing on running and breathing, and the camaraderie I found with my trail family. The relationships I have with my trail family are very intimate in the way that only we know what we go through out on the trail — all the highs and lows are very individual but we still have that sixth sense of what the other is feeling and how to help each other push through,” said Gutierrez.

Other members are welcome to join the group, which currently includes Amber Kyne and Megan Partin. The women are “a little family” and meet up every Saturday — and sometimes Sundays, too — to do long training runs. “We motivate each other, sign up for races together, support each other, and travel all over together. We do race-cations, so we choose races at destinations that we get to travel to,” said Lara, who recently traveled to Florida to support and crew Sánchez for the Lake to Ocean 100k. Sánchez recently relocated to the Sunshine State. 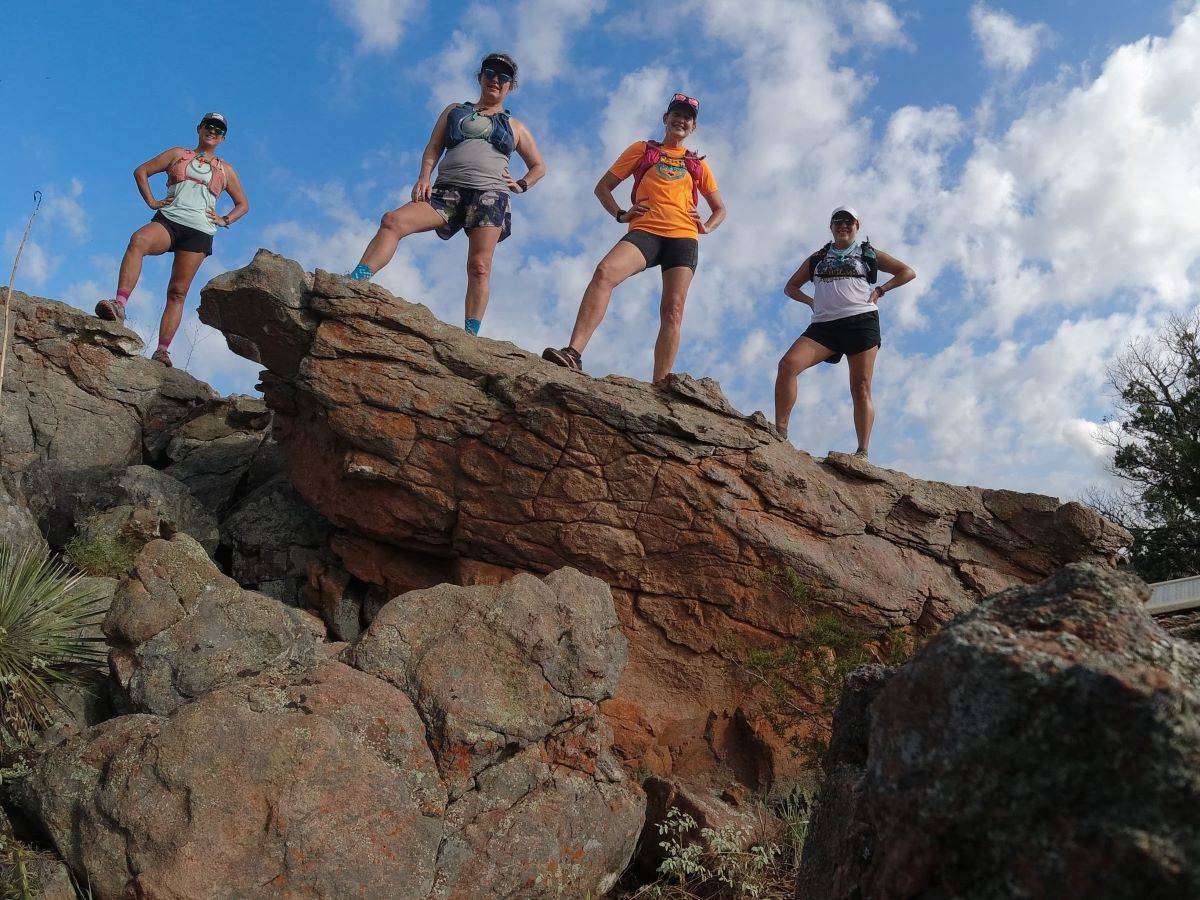 “I’m looking forward to crewing local races to support our community as well as get to know the trails and environment more,” said Sánchez and added, “Florida is really interesting: flat as a pancake but the humidity and unique terrain certainly give it’s own flair. I had never run in swamps before!”

Ultra Reinas utilizes their ultrarunning goals to fundraise for important issues. During the early stages of the COVID-19 pandemic in 2020, the trio raised funds for the San Antonio Food Bank during a 100-kilometer attempt through the city of San Antonio. They faced many logistical challenges during the urban ultra, due to water fountains being turned off and restaurants and gas stations being closed.

“Megan was crewing us, refilling our water bottles, and driving to meet us at the next trailhead. We got to a little over 50 miles and fundraised around $200,” said Lara.

The following year, for Gutierrez’s 40th birthday, the ladies hosted a virtual 5k to raise funds for, and awareness of, the Missing and Murdered Indigenous Women (MMIW) epidemic.

“This is a really, really awful thing going on in the Indigenous community with women going missing, or murders that are underreported, not reported, or not followed through in the judicial system. We are at a standstill, so all those proceeds go to close that judicial gap,” said Lara.

While participants covered the 5k distance, the trio cycled 20 miles and ran 20 miles on the San Antonio Greenway Trails system for a total of 40 miles for 40 rotations around the sun. 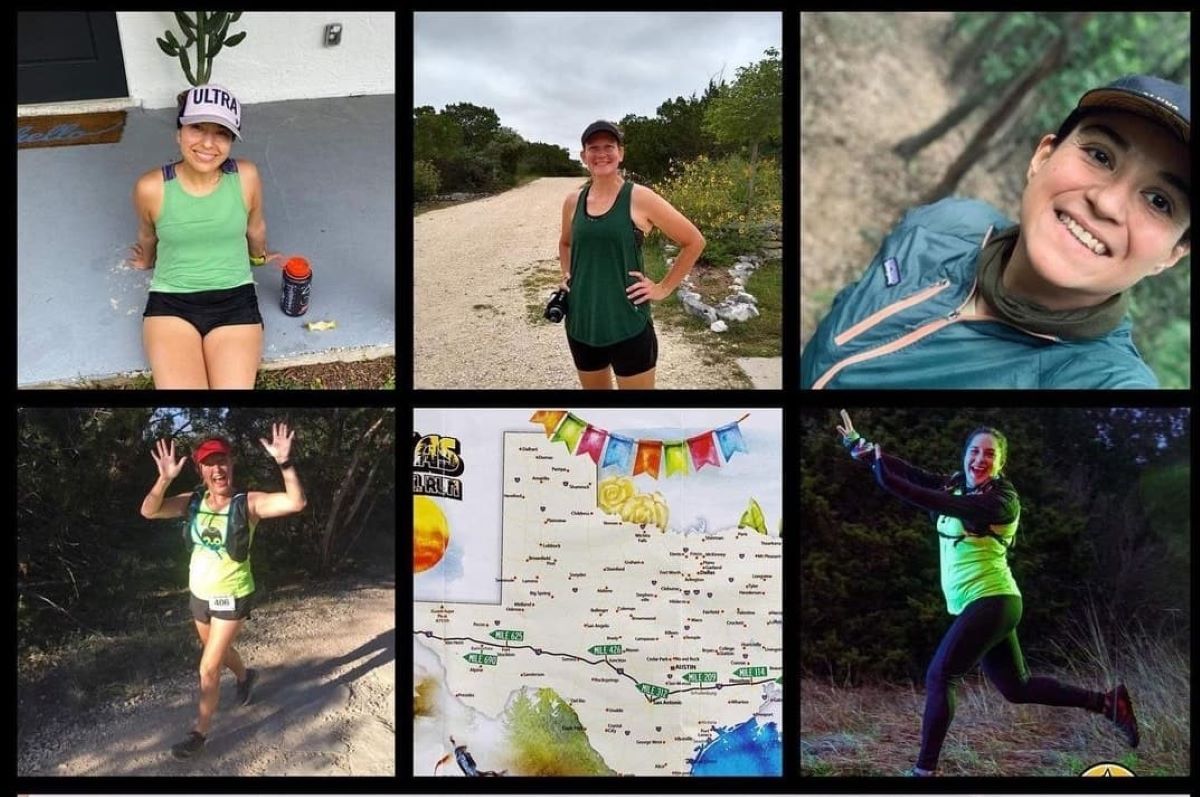 How to Support Ultra Reinas

On the horizon, the Ultra Reinas are racing the Sky Island Race in the Davis Mountains of West Texas. Lara is doing the 25k distance while Sánchez and Gutierrez are covering 50k.

They’re also training for the Texas-based Palo Duro Trail Run: Lara is registered for the 50 miller, Sánchez is crewing, and Gutierrez is doing the 50k. The ultimate distance is in January 2023. Lara and Sánchez are running the Long Haul 100 Mile in Florida.

Allies and community members of all backgrounds can support Latinas in ultrarunning through Ultra Reinas and other groups like @latinasrunning and @latinasrunofficial.

Lara said, “Like, follow, and share their content and get out there on the trails as Latinas. It could be in your neighborhood — get out on a walk. That’s how the majority of us start. You start walking and it turns into a run-walk. Then you try to run further. Then further than that. Then you’re signed up for an ultramarathon before you know it.”

Gutierrez added, “Our goal is to inspire and encourage people in our community, from all walks of life, to join us on the trail.” 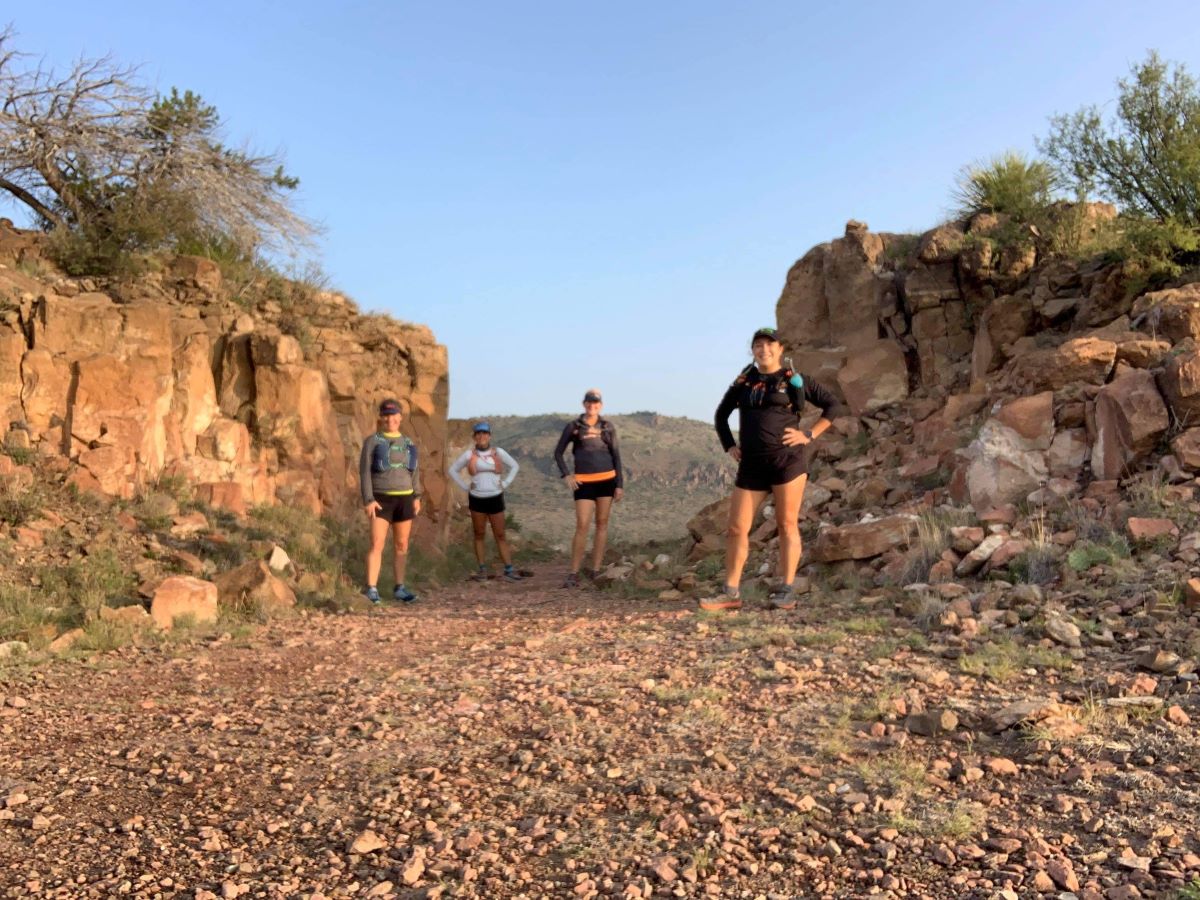 From left to right are Megan, Sol, Amber, and Mechella in the Davis Mountains in 2020.