Tour Stage 6 Report: Stage 6 certainly wasn’t an easy day after the chaos of the cobbles. The longest stage started with attack after attack, mostly including the yellow jersey Wout van Aert. After a solo Van Aert was caught with 11 kilometers to go, the race hit the final short climbs and it was Tadej Pogačar who dominated the finish to take the stage and the overall lead.

Stage win and the yellow for Tadej Pogačar 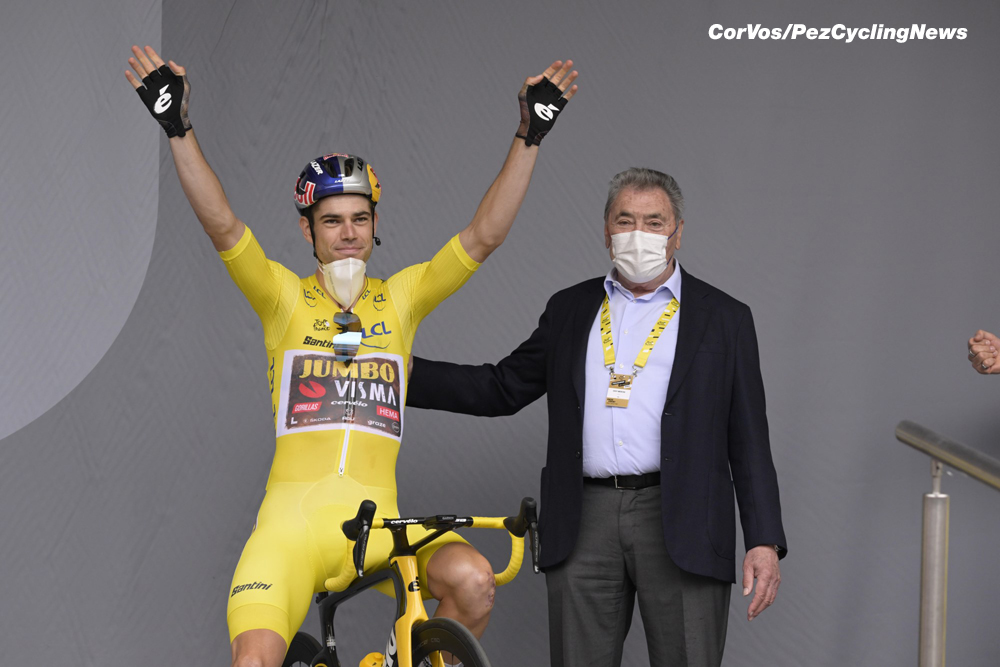 Wout and Eddy at the start

Tour de France director, Christian Prudhomme: “This is a long trek through the Ardennes, and the contenders for victory will have to gauge their effort well if they want to shine in the finale, which is even tougher than the one that featured the last time the Tour visited Longwy. The leading puncheurs will be to the fore on the Mur de Pulventeux, situated 6km from the finish (800m long and averaging 12%), before having the opportunity to show their explosive qualities on the Côte des Religieuses.” 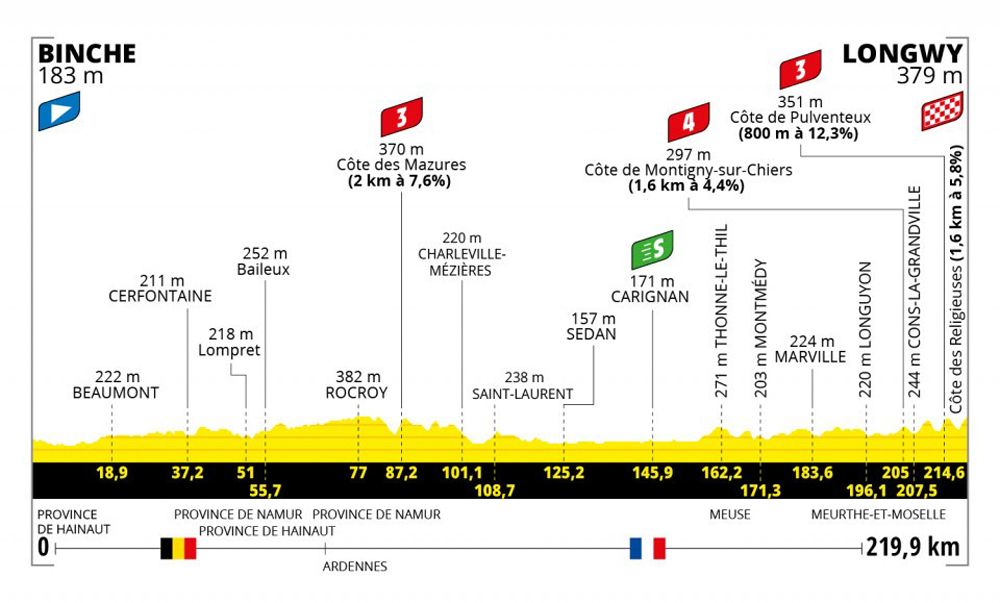 Today there was no time to recover from all the chaos of the cobbles of stage 5. In a very animated start, half the peloton tried to get in the escape of the day, which meant that over 50 kilometers were covered in the first hour. Taco van der Hoorn promised to attack before the stage and the Intermarché-Wanty-Gobert kept his word. The Dutchman managed to break away from the peloton together with the French puncheur Benoît Cosnefroy and the Latvian Toms Skujiņš. These three managed a maximum lead of 1 minute, but this wasn’t the move of the day. Van der Poel was having a hard time again at the tail of the group. 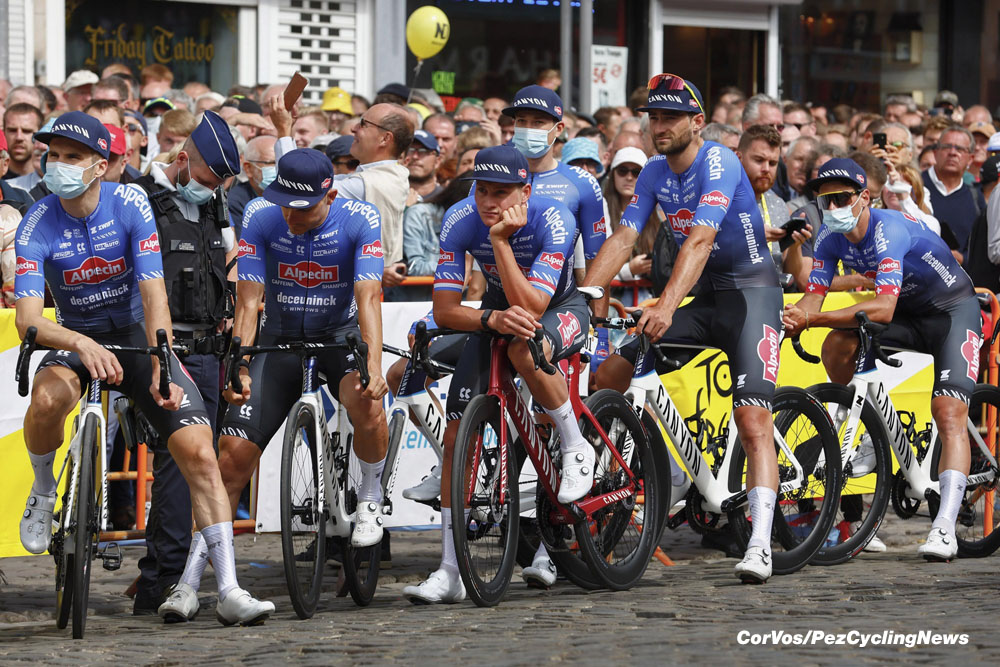 What is Mathieu van de Poel thinking about? That is the question!

It remained restless in the peloton and there were many counter attacks, with Wout van Aert as the main instigator. The yellow jersey wearer attacked several times, but couldn’t get away. Attacks from Filippo Ganna, Tom Pidcock, Nils Politt and Matej Mohorič were also nipped in the bud, but this ensured that the lead of the three, Van der Hoorn, Skujiņš and Cosnefroy, was wiped out. With 180 kilometers to go, these three were caught and the battle would start again. 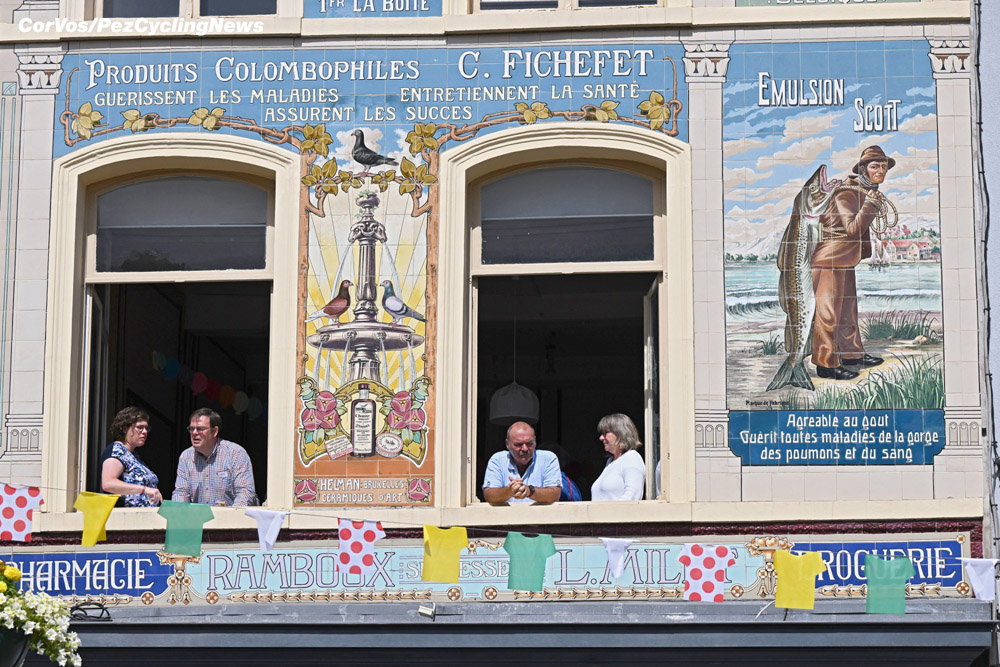 Fans looking out of their windows in Binche 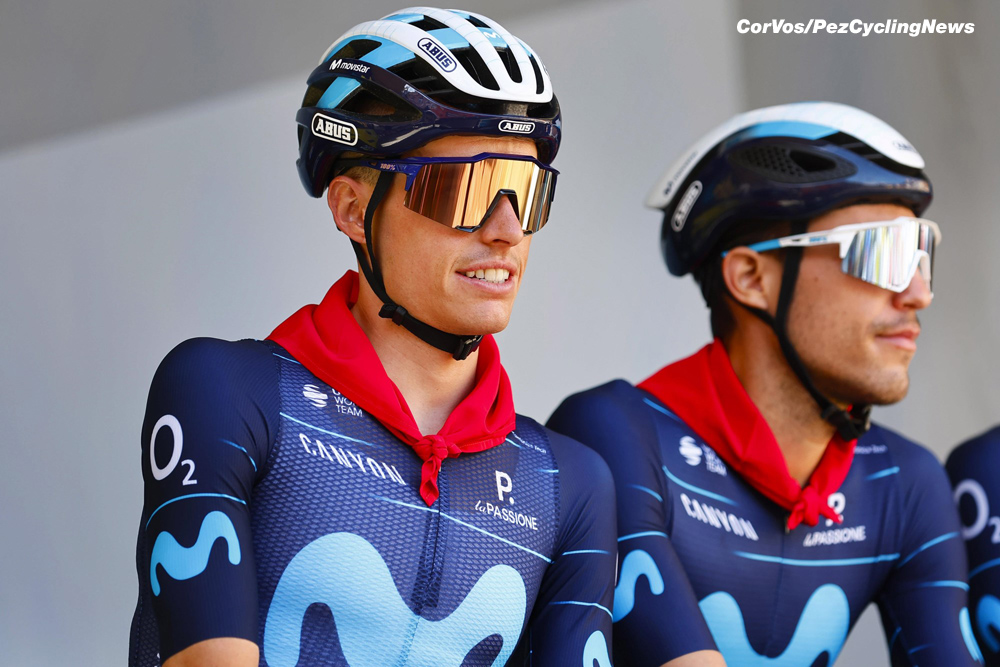 Van Aert then tried several times to jump away from the peloton, but the Jumbo-Visma rider was not with a group of ten men. With the KOM Magnus Cort, Kasper Asgreen, Mads Pedersen, Vegard Stake Laengen, Andreas Leknessund, Simon Geschke, Georg Zimmermann, Stan Dewulf, Ben Swift and Christophe Laporte. This escape seemed to have a chance of success, but in the peloton they were still not satisfied with the lead group. This resulted in another regrouping after 60 crazy kilometres. In the peloton there was no end to the incessant attacks. Van Aert turned out to have enough reserves and with 145 kilometers to go, he took off again, this time with Quinn Simmons and Jakob Fuglsang. This turned out to be an important moment in the race, because the peloton thought it was enough and let it go. The lead of Van Aert, Simmons and Fuglsang rose to more than 1:30 and so the escape of the day had finally gone. 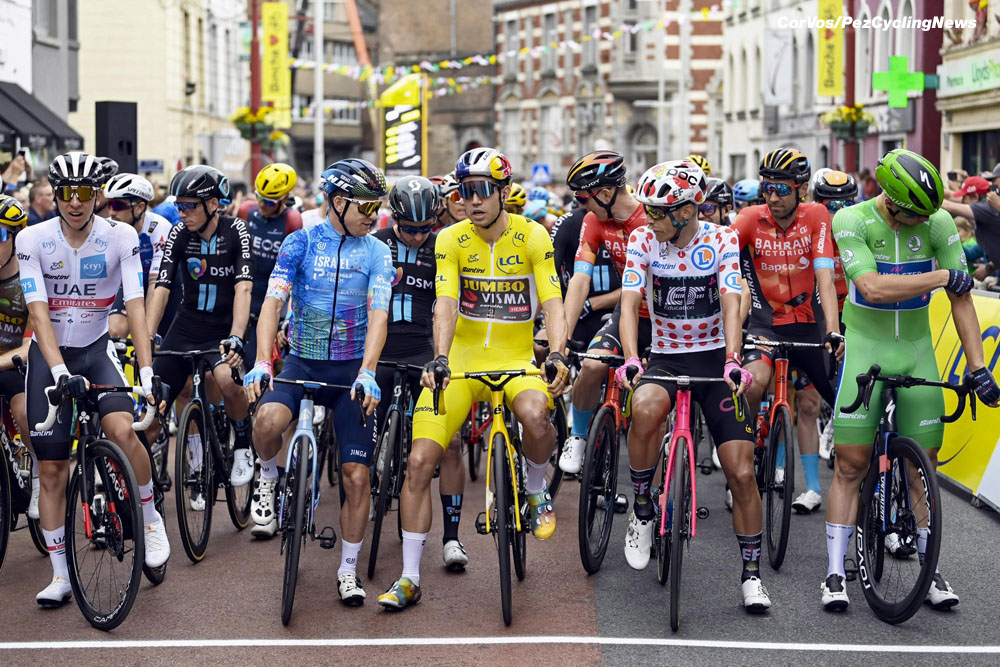 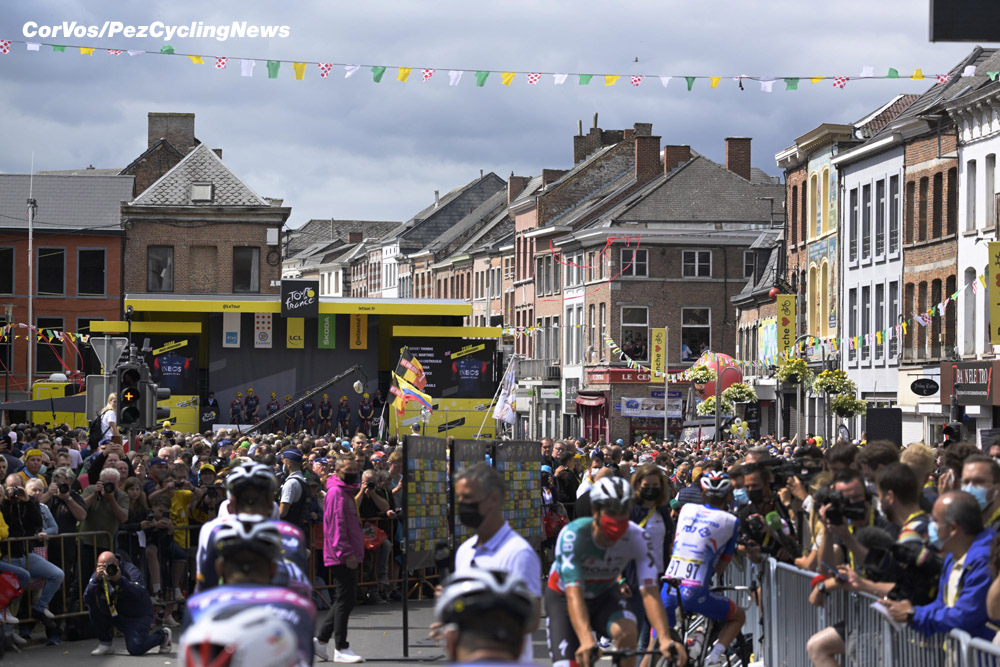 The roll-out from Binche

The three started the first climb of the day in the French Ardennes after 88 kilometers of racing. On the Côte des Mazures, Van Aert had a chain problem, but was able to sort it himself and was soon back with his fellow escapees. At the top of this Cat 4 climb, Simmons was first over the summit. The peloton, now led by UAE Team Emirates, came over more than 2 minutes behind. The leading group took more time in the following kilometers and with 115 kilometers to go, Van Aert, Fuglsang and Simmons had a 4 minute lead over the peloton. UAE Team Emirates was still doing the bulk of the work, but Tadej Pogačar’s squad had help from Guillaume Van Keirsbulck of Alpecin-Deceuninck. The Belgian must have had ambitions for the stage victory, possibly with Jasper Philipsen, who has been close a few times in this Tour, or with Mathieu van der Poel? 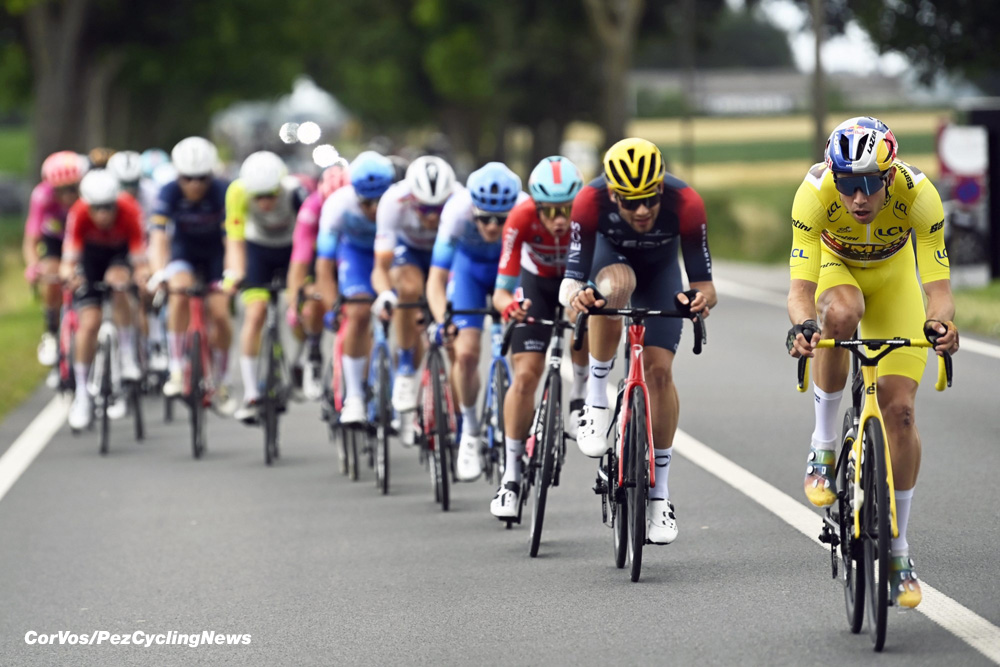 Van Aert started the action from the gun 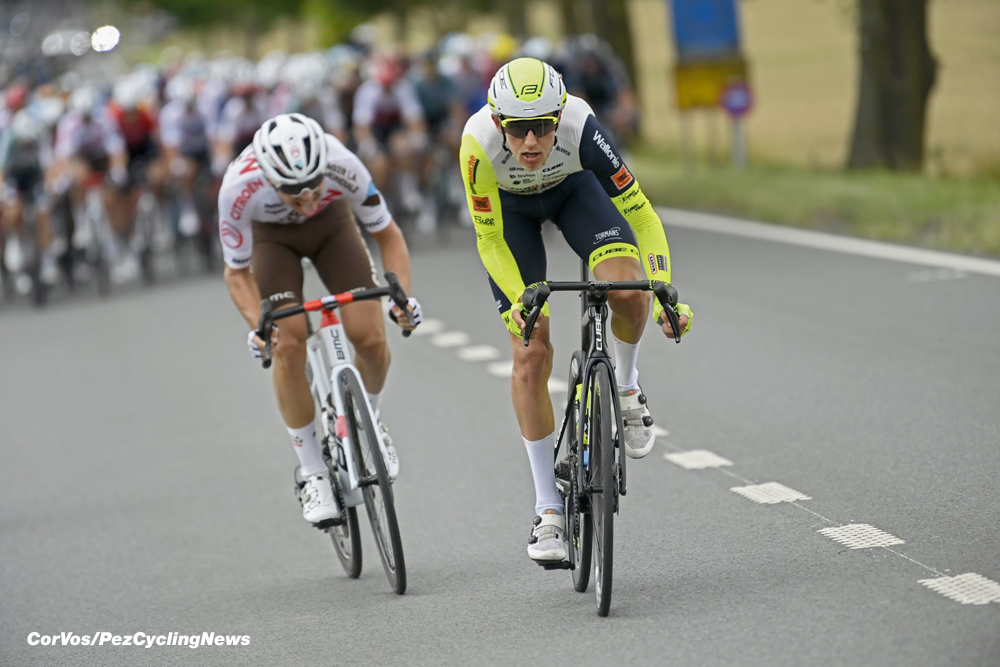 At the start of the last 100 kilometres, BORA-hansgrohe decided to pick up the gauntlet in pursuit of the three off the front. The peloton came closer and closer and at 80 kilometers out, the difference was less than 3 minutes. Van Aert, Simmons and Fuglsang entered the town of Carignan for the intermediate sprint. As expected, Van Aert scored 20 points for the green points jersey. Two minutes later the peloton was also fighting for the remaining points: Philipsen took 13 points from Fabio Jakobsen on 11 and Christophe Laporte, 10 points. Fuglsang then decided to wait for the peloton after a comfort break. Van Aert and Simmons had the remaining 60 kilometers to look forward too, with a chasing peloton led by BORA-hansgrohe, Alpecin-Deceuninck, UAE team Emirates and EF Education-EasyPost. 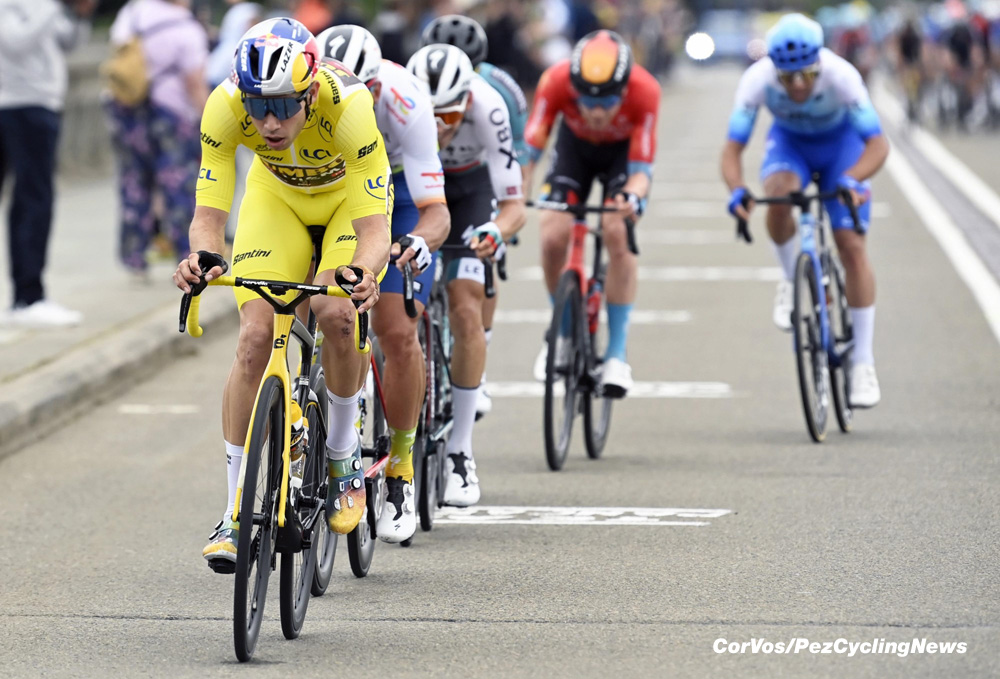 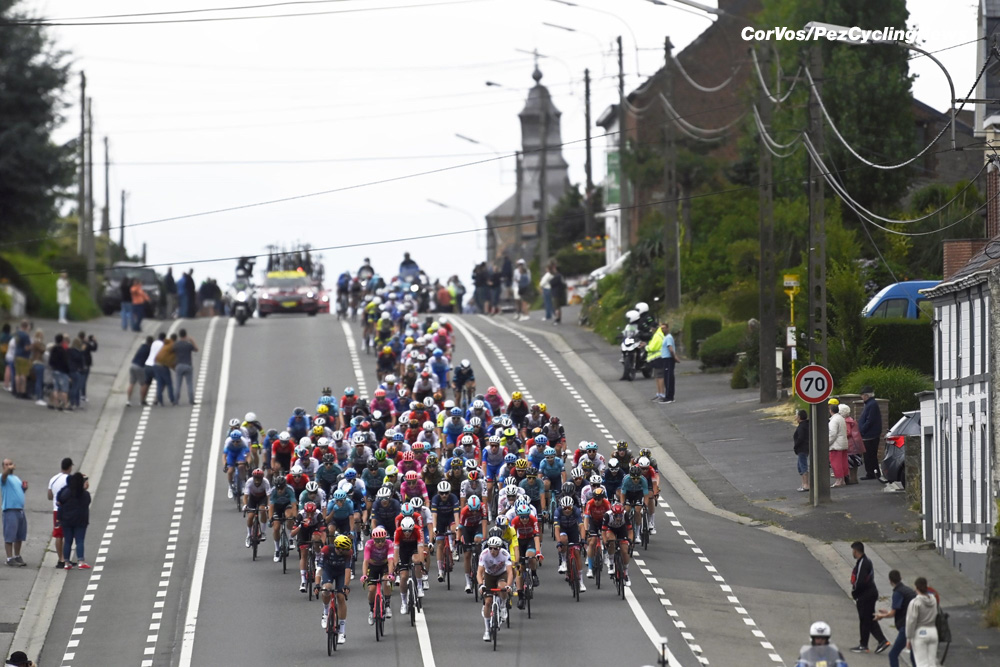 The peloton didn’t ease up either

The two brave escapes seemed to be on a hopeless mission, as the lead was reduced further and further. With 30 kilometers to go, Van Aert and Simmons were 1 minute ahead of the pack. At this point Van Aert lifted the pace and left Simmons to go solo, but he still had to cover 25 kilometres to the finish. This seemed like a bit too much, but with a Van Aert in super shape you can never be sure. In the peloton Filippo Ganna took the lead and the men of Cofidis also got involved in the chase. With the start of the last 20 kilometers Van Aert’s lead had shrunk to 40 seconds. There were still 20 seconds left at the foot of the Côte de Montigny-sur-Chiers. This turned out not to be enough even for Van Aert, who was caught with 12 kilometers to go. 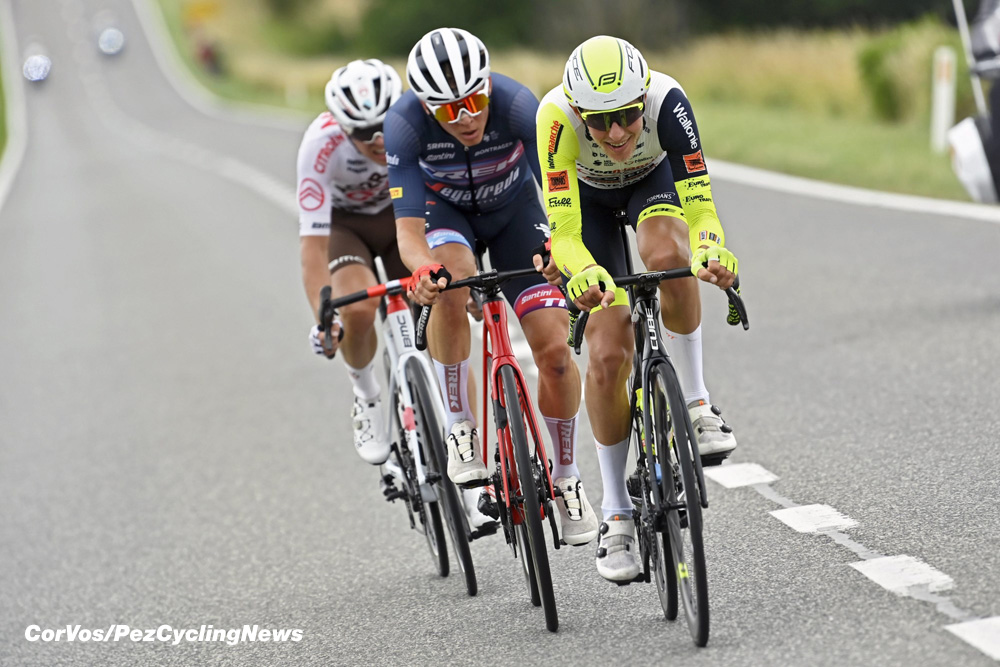 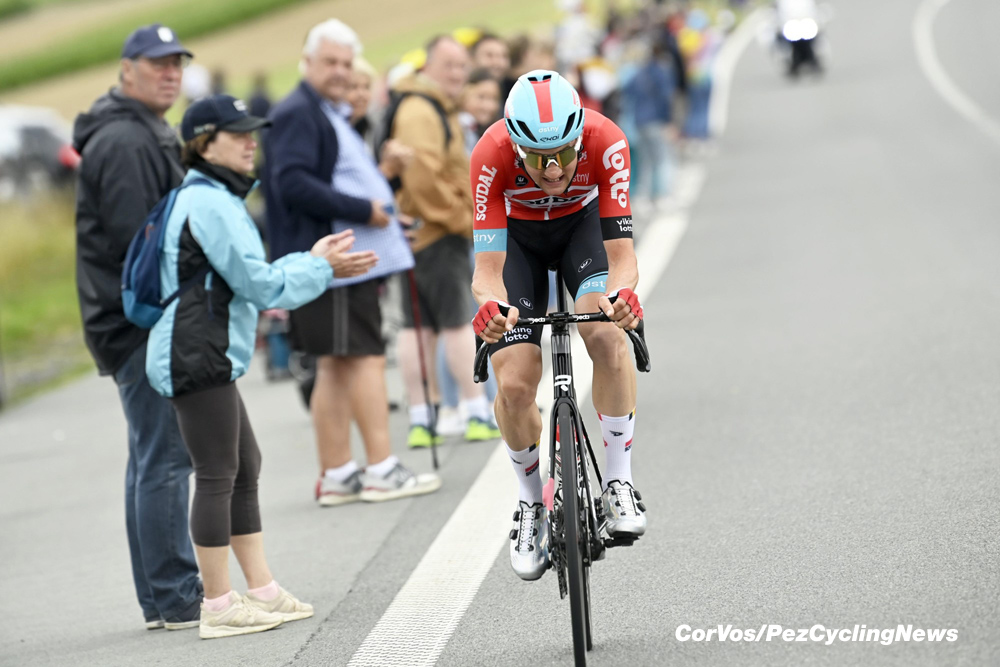 Tim Wellens had a failed effort

In the run-up to the penultimate climb, the steep Côte de Pulventeux (800 meters at 12%), there was a crash involving Reinardt Janse van Rensburg and Kobe Goossens and others. The GC riders managed to stay out of danger and started the finale with a compact and thinned out peloton. There was no longer any question of Van der Poel doing anything as the Dutchman had let the race go. Not much later, the lights went out for Van Aert, who gave up the yellow jersey. In the first group it was now all hands on deck due to crashes. The biggest victim was Alexandr Vlasov of BORA-hansgrohe who had to chase just as the riders started the steep ramps of the Côte de Pulventeux. Alexis Fuillermoz decided to attack. The Frenchman of TotalEnergies got a gap, but at the top of the Pulventeux was joined by Pogačar, who had counter-attacked. 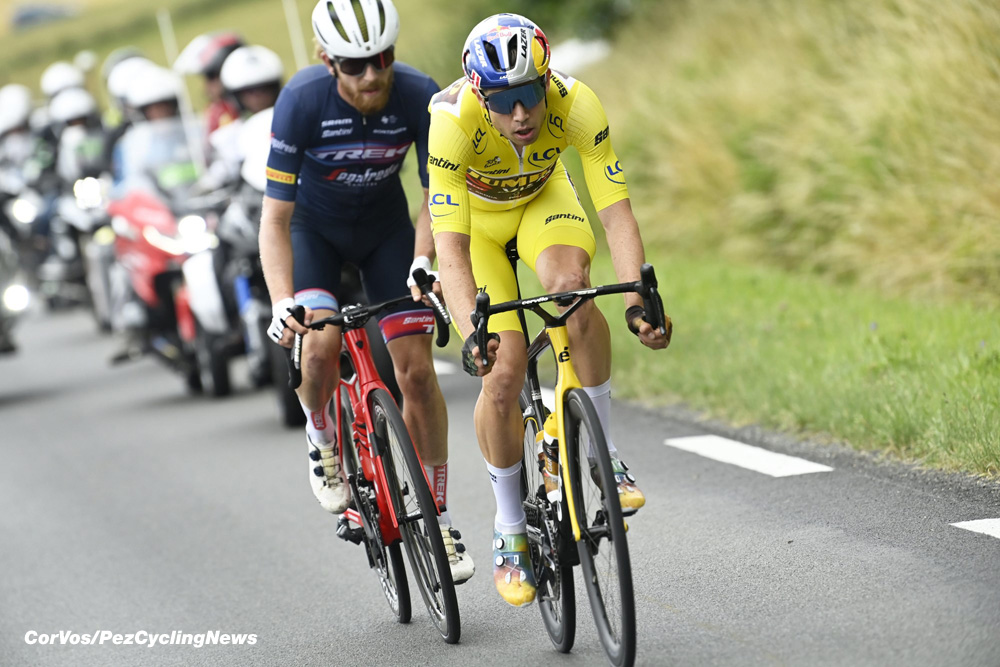 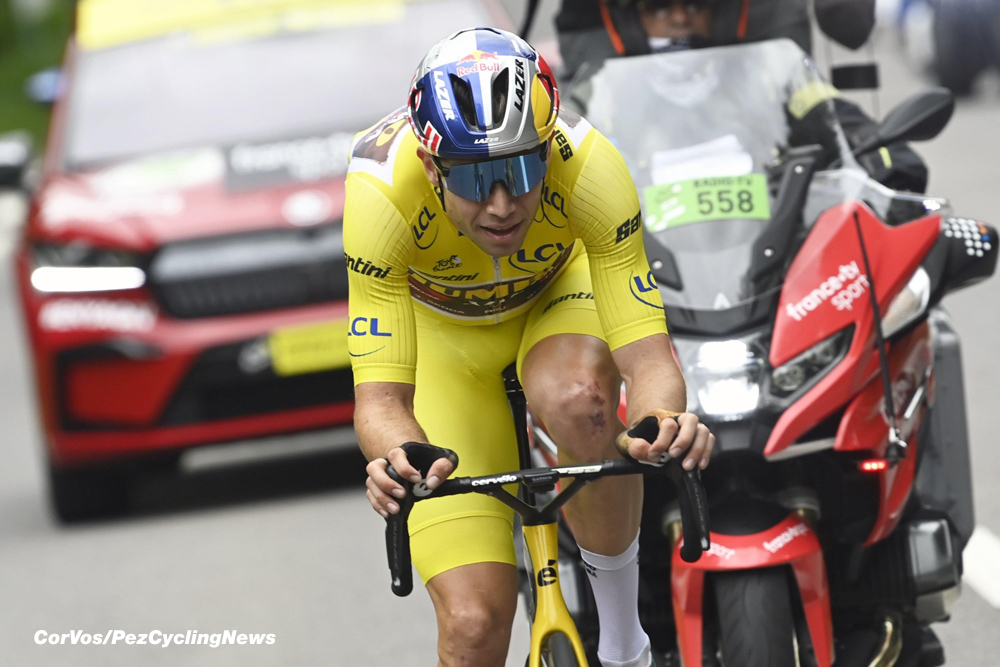 The two-time Tour winner failed to cross to Voillermoz and eased off. Vuillermoz, winner of the Tour stage to Mûr-de-Bretagne in 2015, kept a slight lead in the descending kilometers to the final climb of 1.6 kilometers. Fuillermoz was strong, but not strong enough to stay out of the grip of a first group of about 30 riders. UAE Team Emirates then took the lead for Pogačar. It was up to Brandon McNulty to lead-out his Slovenian leader as best as possible for the final sprint. 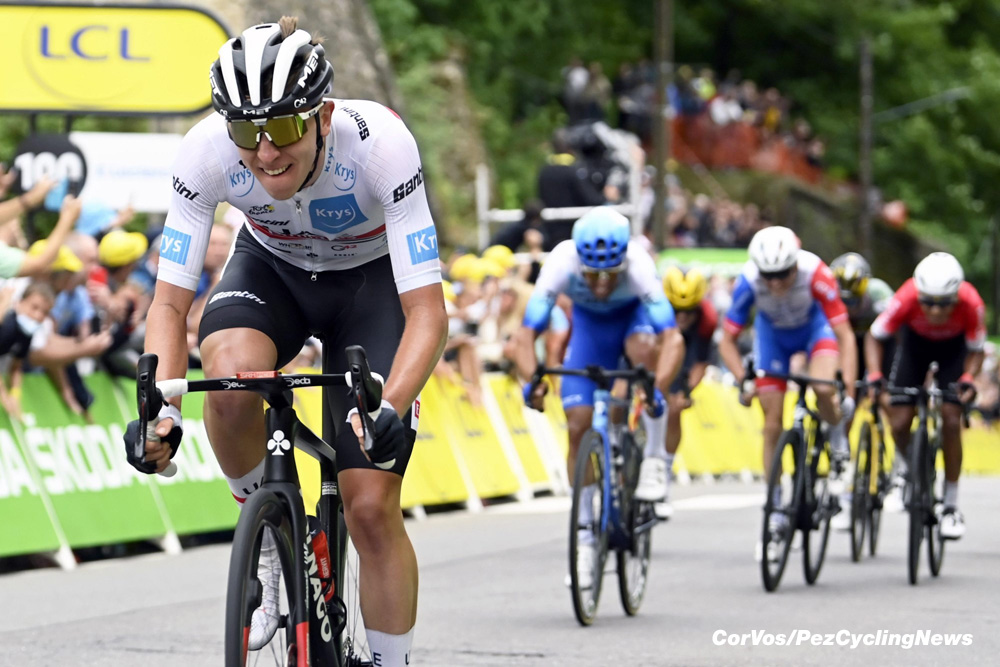 No one had an answer to Pogačar

It was Primož Roglič who was the first to start the sprint with just 400 meters to go, with Pogačar his the wheel. Pogačar had everything under control, waited patiently for his moment to come out with a strong sprint. Pogačar won the sprint with ease, ahead of Michael Matthews and David Gaudu. Tom Pidcock and Nairo Quintana rounded out the top 5. Pogačar also managed to take the yellow leader’s jersey from Van Aert. 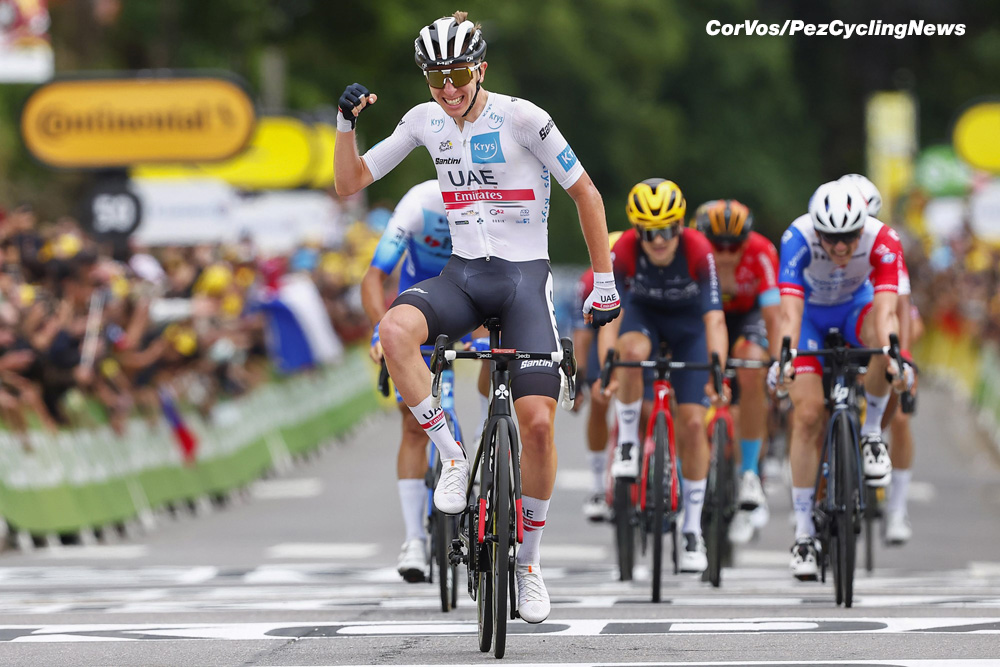 Pogačar was much too strong for everyone

Stage winner and overall leader, Tadej Pogačar (UAE Team Emirates): “Every time I win it’s even better than before. It was such a hard day from the start. The first two hours were so crazy. The strongest guy was the in the break. Many teams were pulling the peloton strongly, our team did it as well. In the end, the peloton was stronger [than Van Aert] but we were not sure to catch him. I was feeling good. My team did an incredibly good job to put me in a perfect position. It was not a pure sprint after we rode the last two climbs above threshold. I guess I had good legs to push in the end. I don’t mind to take the yellow jersey but I’m above all happy to take the stage win. Everything else is bonus.” 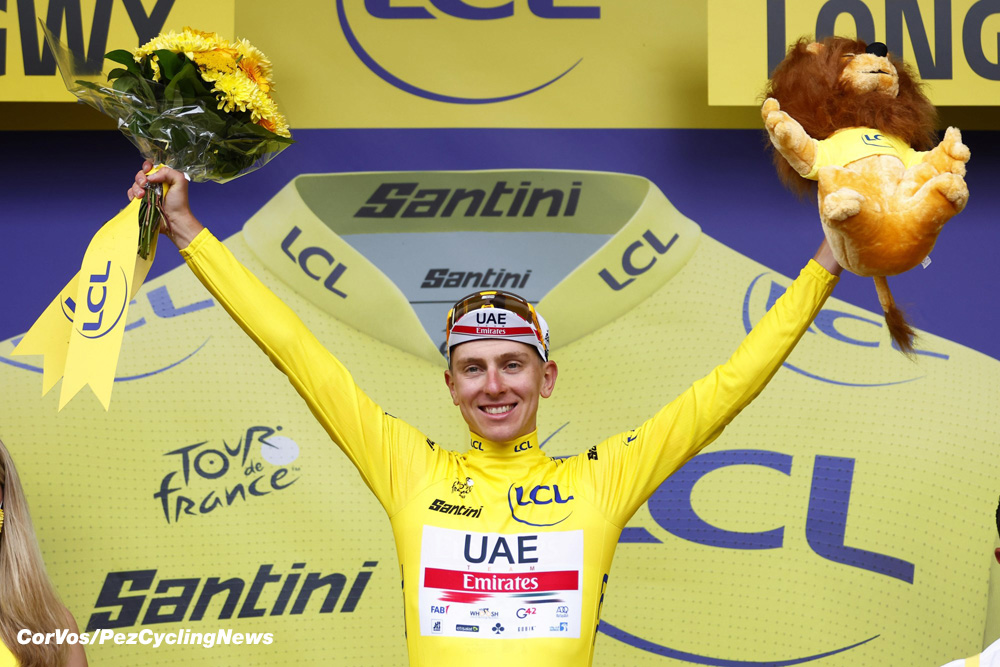 Pogačar back in yellow