Pre-season has begun and Arsenal’s new number nine, Gabriel Jesus, stole the headlines with his cameo against Nürnberg. The Brazilian came off the bench and looked incredibly sharp, scoring a goal and generally being a nuisance, up top alongside Eddie Nketiah.

Arsenal have not only signed Jesus this summer but added him to the club just weeks after convincing Nketiah that he would play enough football to warrant a new deal. Eddie could have walked away for nothing but he obviously does believe he will get plenty of chances to earn regular minutes in 2022/23 and beyond and using him and Jesus together now looks like a viable option.

And I’m not just saying this because of one half of pre-season football but because of the end of last season. Nobody here wants to relive that spell, least of all me, but it feels noteworthy that Mikel Arteta would consistently have Nketiah and Alexandre Lacazette both on the pitch at the same time when chasing games late last season.

It worked once, in February, as Arsenal scored a late winner against Wolves. The Gunners collected just four points from losing positions all season, the joint worst return in the league, and three of them came that night with two strikers on the pitch, two wingers (Bukayo Saka and Nicolas Pépé) getting chalk on their boots and a makeshift back three of Ben White, Gabriel and Nuno Tavares providing the last line of defence. It didn’t work again.

Arsenal were definitely one of the best teams in the league last season when they weren’t trailing: the side’s expected goal difference (xGD) of 0.82 per 90 was the fourth best in the Premier League, only behind Chelsea, when level or ahead . When behind, Arsenal’s xGD per 90 slumped to -1.4, the 18th best (or third worst) in the entire top flight. This still only rises to -0.5 xGD/90, 11th best in the league, when you just take minutes when both teams had 11 players on the pitch.

Figuring out how to look more dangerous from losing positions is the next big question facing Arteta. And he clearly thought there was something in the two-striker, makeshift three-man defense idea and it became his go-to when injury struck Kieran Tierney in April. A half-time substitution saw Tavares replaced by Gabriel Martinelli with Arsenal 2-0 down at Crystal Palace as Granit Xhaka went to left-back. Just 20 minutes later, Nketiah replaced Cedric and Arsenal overloaded on the left, with Xhaka tucking in and Saka and Emile Smith Rowe providing the width, switching positions, with Nketiah drifting out to that flank to combine with them.

We saw something similar, albeit with Martinelli on the left, against Brighton from the off a few days later. 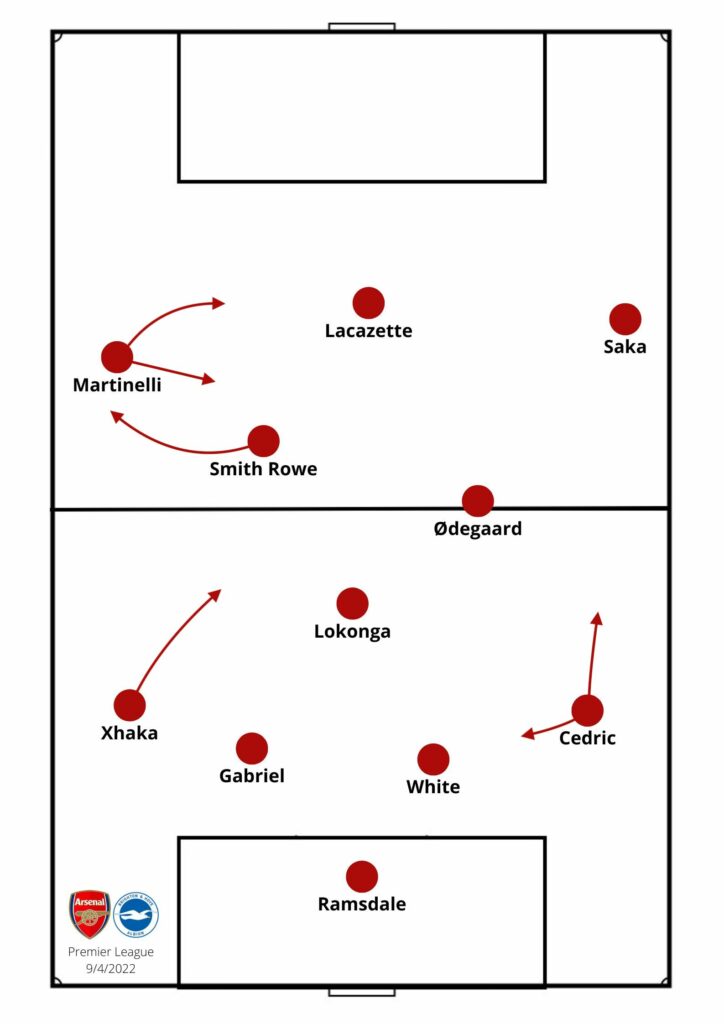 Two defeats meant Arteta shifted Xhaka back into midfield immediately but the plan was not abandoned altogether, coming back when Arsenal were behind at Newcastle, this time with Saka shifting into midfield as another attack-minded sub (Pépé for Gabriel) was made. 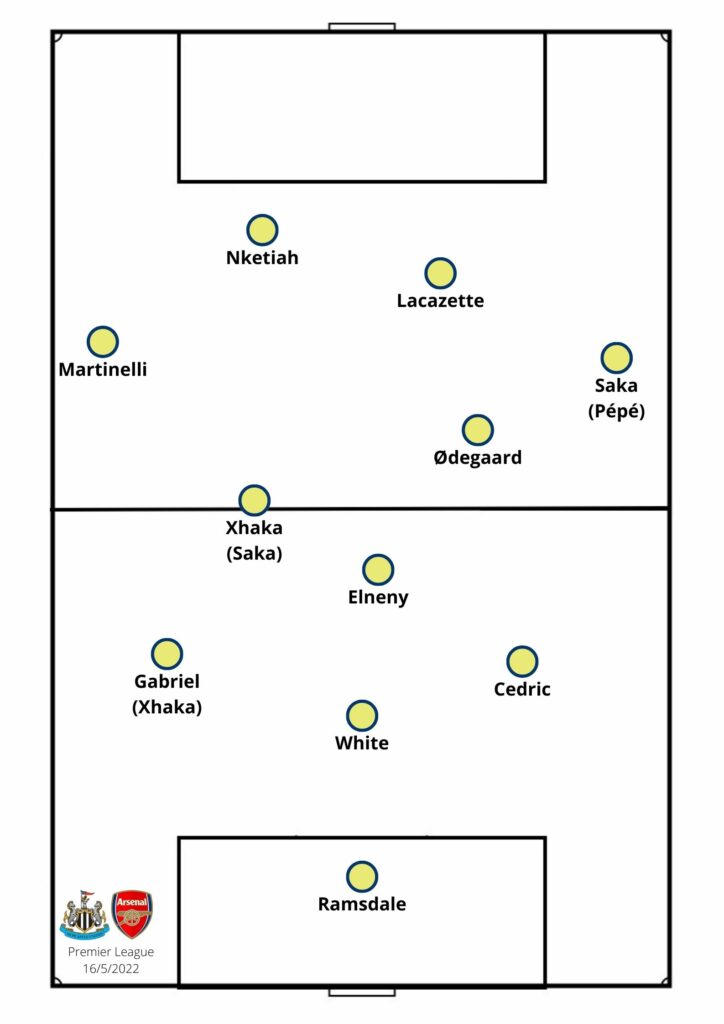 This switch didn’t ever pay off. Arsenal created a few decent openings but were too far behind to get back into the game at Palace, they were profligate and could not stop Brighton from hitting them on the break, and they were toothless and running on empty at Newcastle.

But it does not look like Arteta is willing to abandon the idea, not yet. We shouldn’t read too much into pre-season but it does not feel like a coincidence that, at 2-0 down, the Gunners shifted to that 3-1-4-2 formation once again. And it did definitely help this time around, albeit against a slightly-above-average side from the German second tier. The Nürnberg game shouldn’t be over-analysed but it continued last season’s pattern, just with a new strike partnership.

Arteta talked about tactical reasons for the switch against Palace in April, making the change “for how I wanted to do it with what Palace was doing and how we could attack and control the game much better in that position. We wanted to put another attacking with Emile in that space” before mimicking it from the start against Brighton days later, explaining that he used Granit Xhaka at left-back for “the spaces that we wanted to attack, it fits really well to play Emile in midfield and especially because we thought that space was going to be there as well for Granit to be used, which it was,” before admitting Arsenal didn’t pull the idea off as he had hoped.

There were parallels in the early stages of the second half against Nürnberg, with Martinelli originally looking like a wingback before it became clear that this was a three-man defense with wingers. 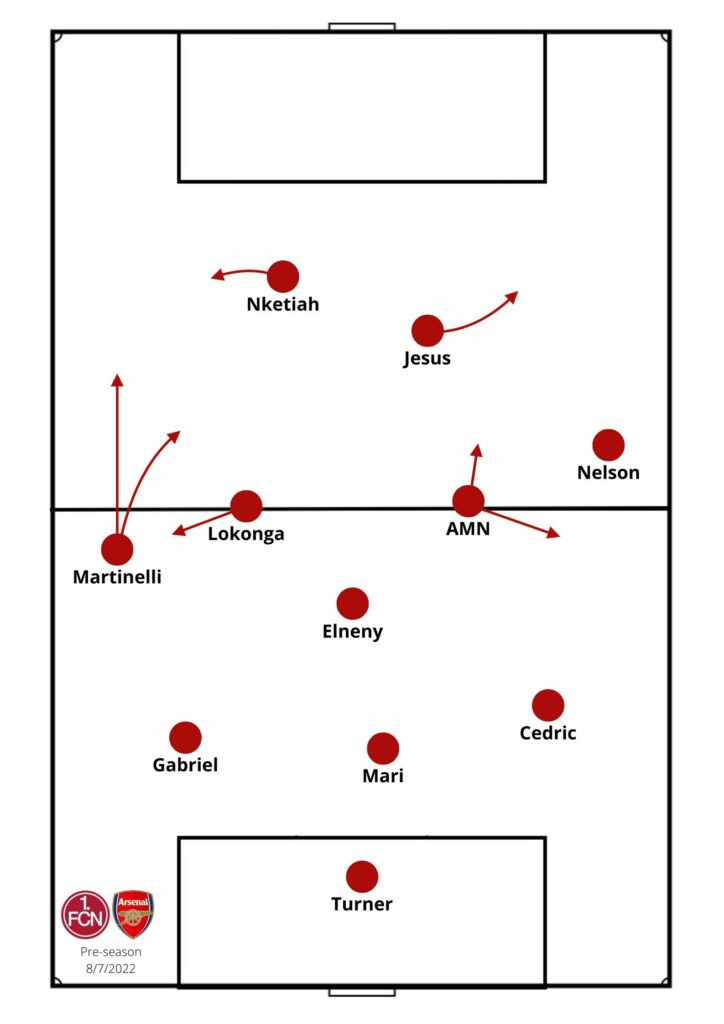 The change was obvious from the second play restarted. Three at the back, Elneny ahead of them, two players in front of him, extreme width from the wide players and two up front. 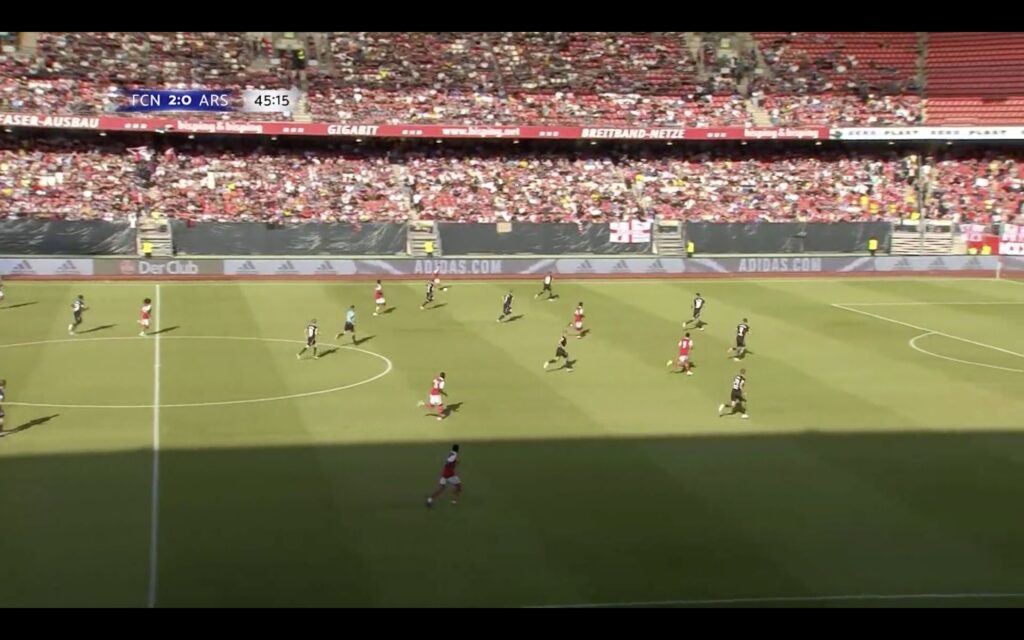 At times Martinelli would look like he was just tucking in at left-back, particularly when he tracked back defensively. This is no bad thing and could help Arsenal use this shape without being as susceptible on the break as they were at times when squeezing an extra attacking player on the pitch last season. 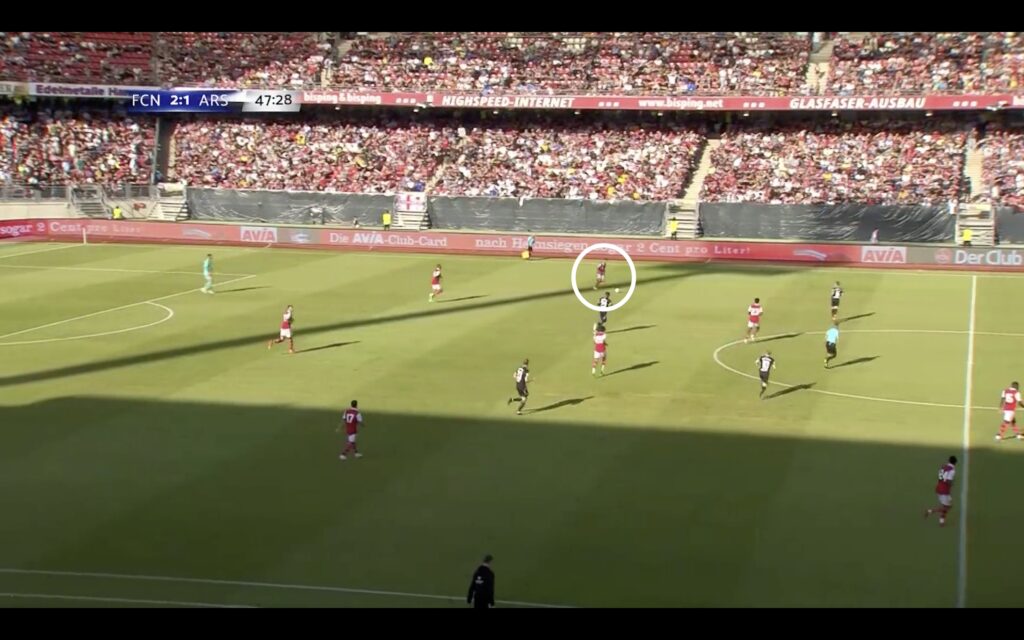 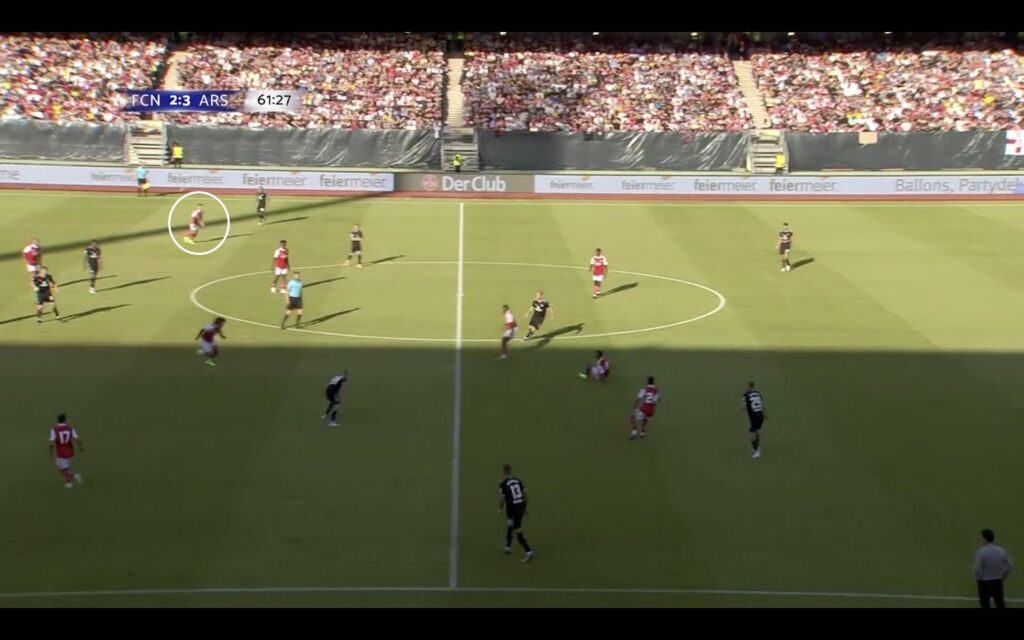 The key was that the Brazilian sprung into action as soon as an attack began, driving down the flank. There were new nuances as well, though, as the wide players — Martinelli and Reiss Nelson — drifted and drove inside, swapping positions with nominal central servers Lokonga and Ainsley Maitland-Niles, who would move out side. Man-markers were shed, space was created, Lokonga had more time on the ball on the touchline with the game in front of him, and Martinelli was closer to the goal when he was in possession.

These rotations suggest Arsenal are getting to grips with this shape this pre-season and we really could see it pay off a bit more when the real football begins.

The back three, with Elneny ahead of them, gave a decent shape to both build up safely and force attacks wide when the ball was lost, the width and rotations stretched Nürnberg, and both strikers took their turns to move wide or drop into midfield to link play but without ever leaving the opposition center-backs with nobody to deal with.

“The understanding with Eddie as well has been really good,” Arteta said of Jesus after the game. “It’s something that we want to have as an option this year, especially with five subs. We have other alternatives and it’s great that they can do it together.”

Don’t expect Arsenal to go with this shape every week this season but all signs are that Arteta believes this is the way to go, with two men up top, whenever the team needs a goal.