Tour Stage 13 Report: After the excitement of the last few days, stage 13 was made for the ‘break of the day’, although the sprinters had hopes at one point. Mads Pedersen out sprinted the remainder of the escape, Fred Wright and Hugo Houle, for the win. The GC men stayed together, so no change on the overall standings.

The final kilometer of stage 13 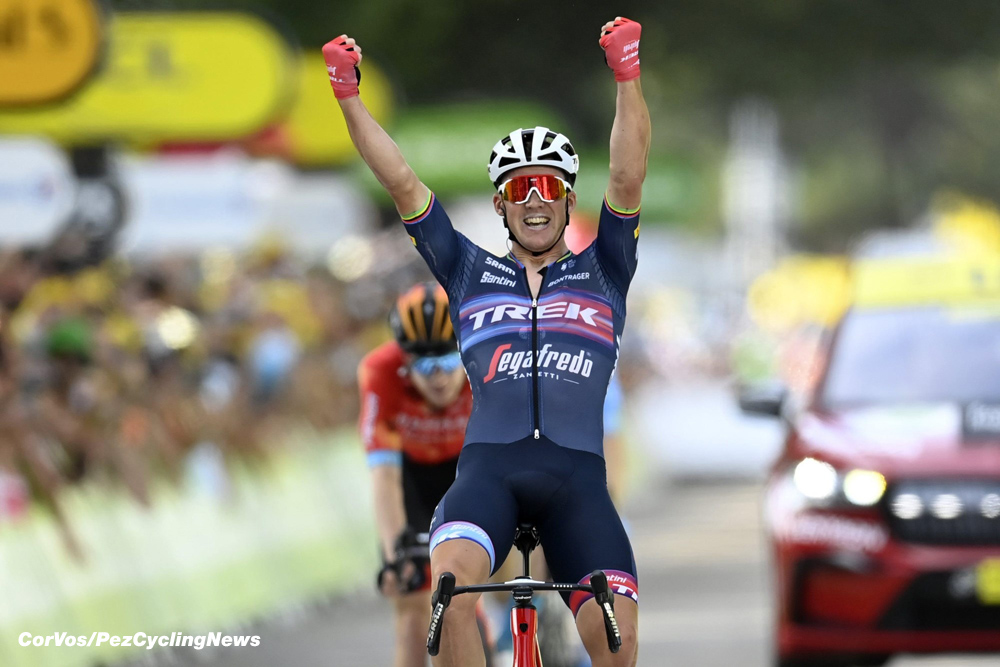 Mads Pedersen won the thirteenth stage of the Tour de France. He was part of a strong leading group and was first across the finish-line in Saint-Étienne after 192.6 kilometers. He was ahead of Fred Wright and Hugo Houle. In the peloton; Jonas Vingegaard had no problems and the sprinter’s teams were unable to close the gap to the break. 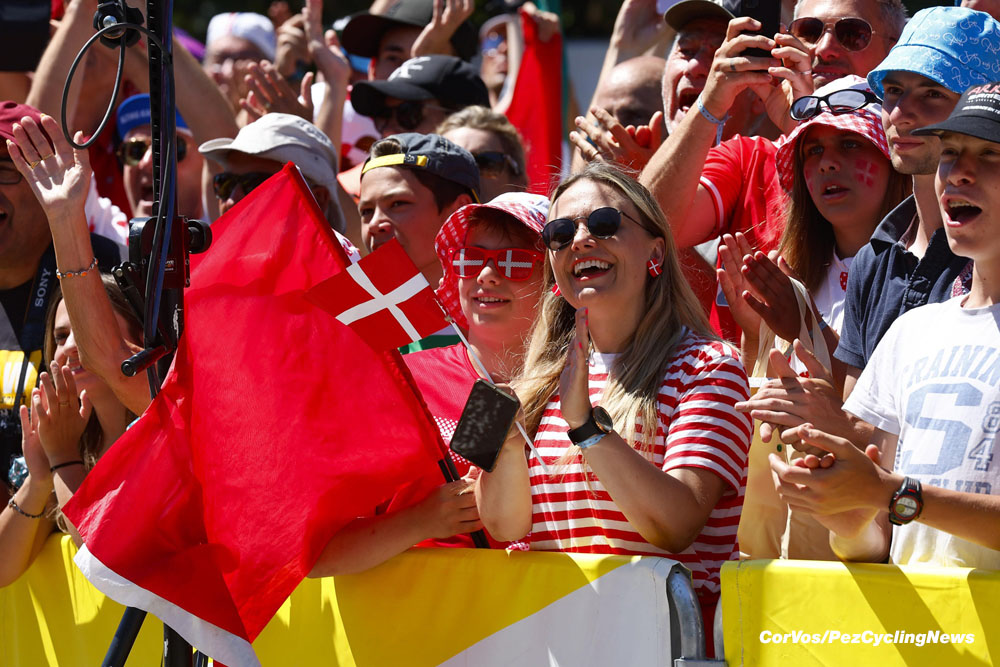 Danish fans at the start, not as noisy as the Colombians

Commentary from Christian Prudhomme: “It’s fair to assume that an important episode in the battle for the green jersey will be played out in the home of Les Verts, the nickname of Saint Étienne’s illustrious, green-shirted football team. A profile without any significant difficulty should, in theory, allow the teams that are focused on sprint finishes to make hay today. On stages of this type, breakaway riders will have little room for manoeuvre, but they can still hope for the best…” 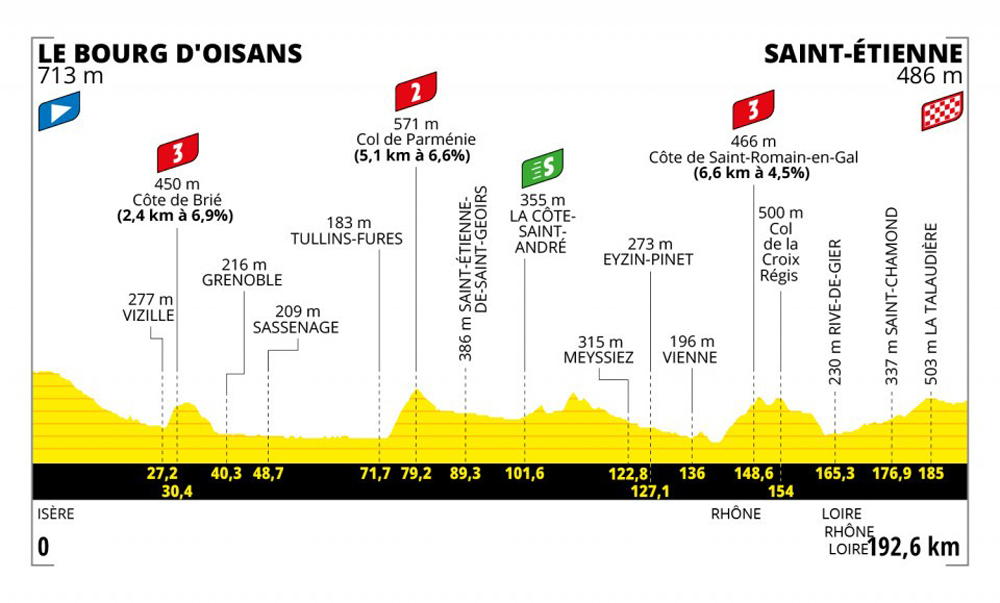 It took a long time before a break was formed. After 30 kilometers, Filippo Ganna (INEOS Grenadiers), Stefan Küng (Groupama-FDJ) and Matteo Jorgenson (Movistar) broke away on the Côte de Brié, but the action didn’t stop behind. 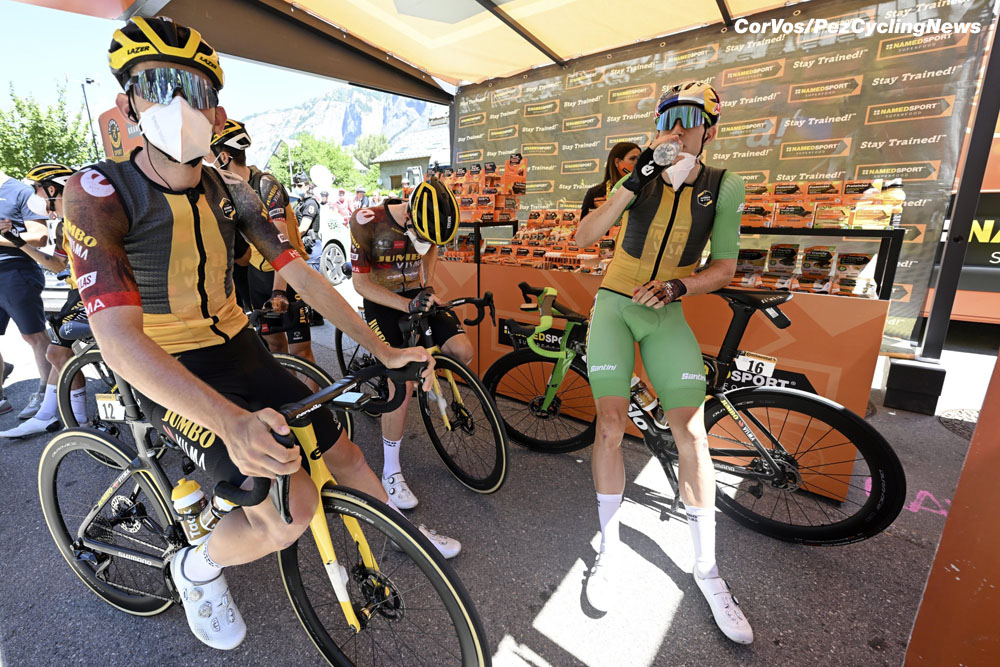 The Jumbo-Visma riders staying in the shade 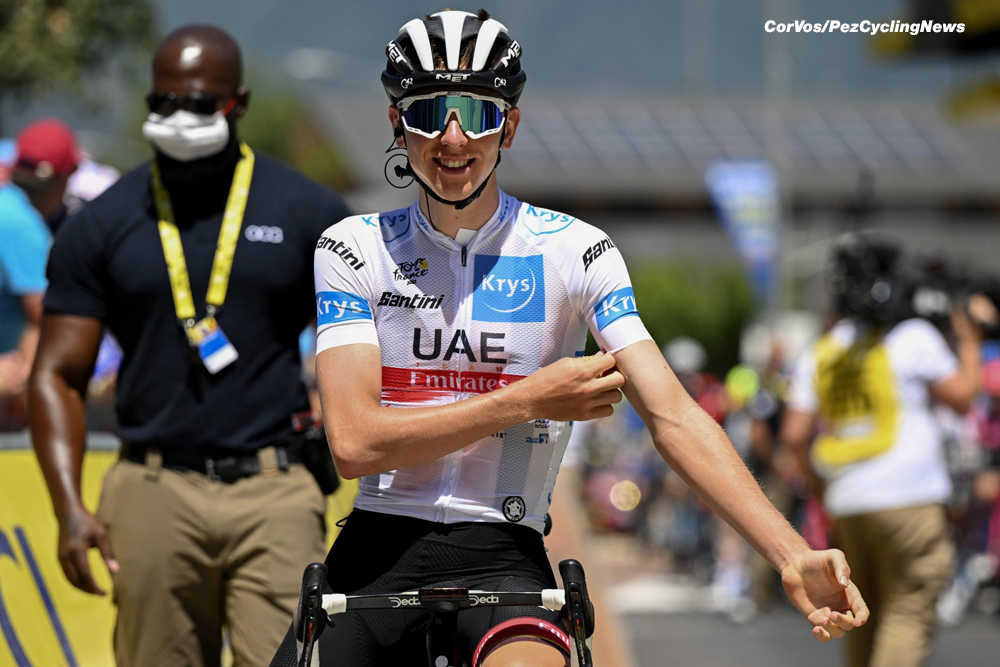 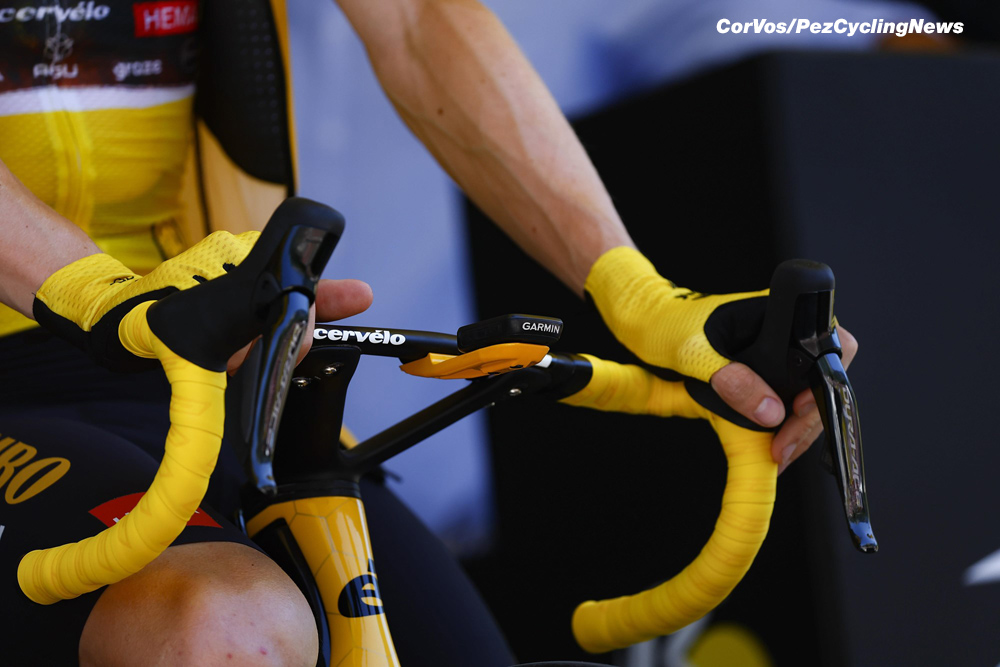 Everything yellow for Jonas Vingegaard 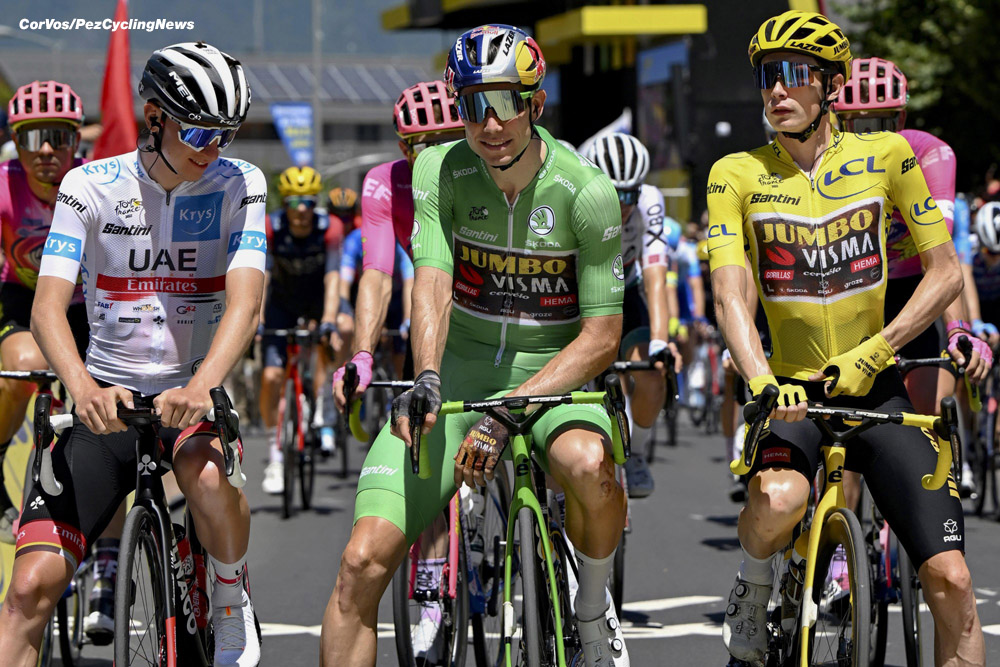 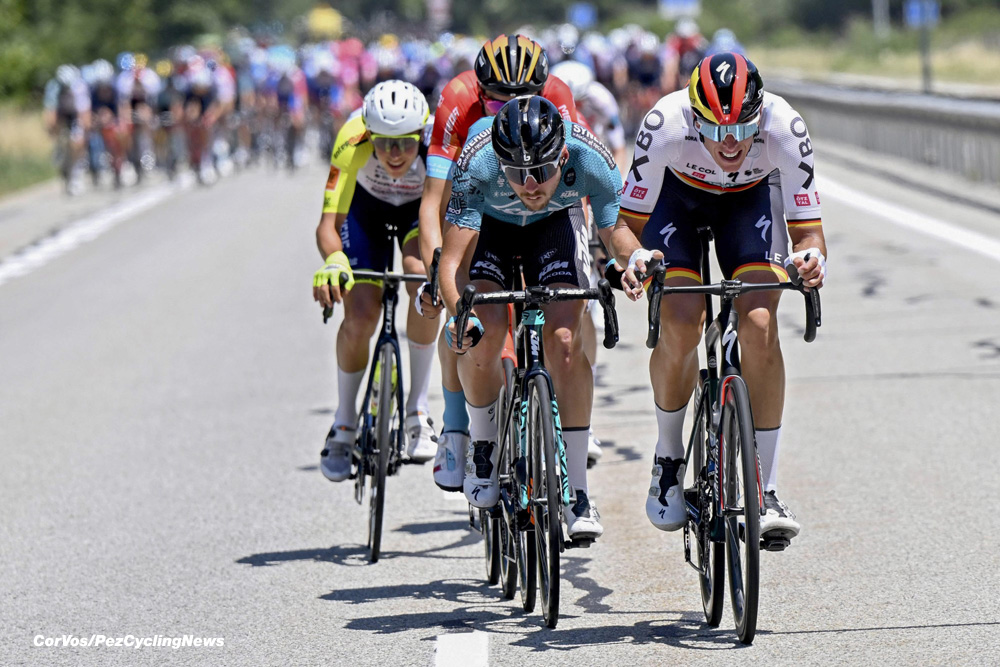 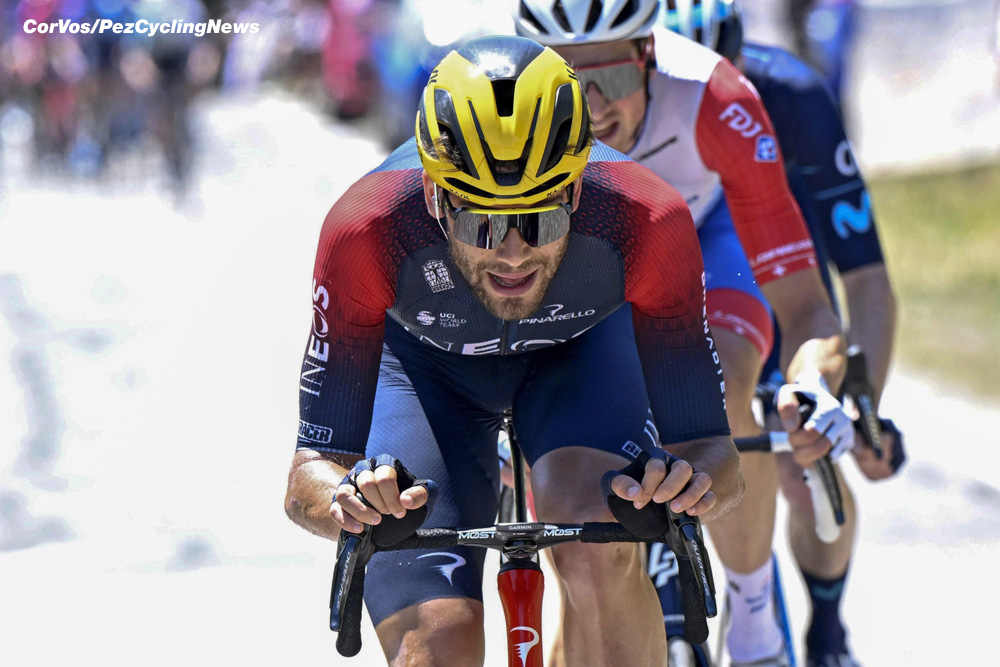 Filippo Ganna (INEOS Grenadiers) wanted in on the action 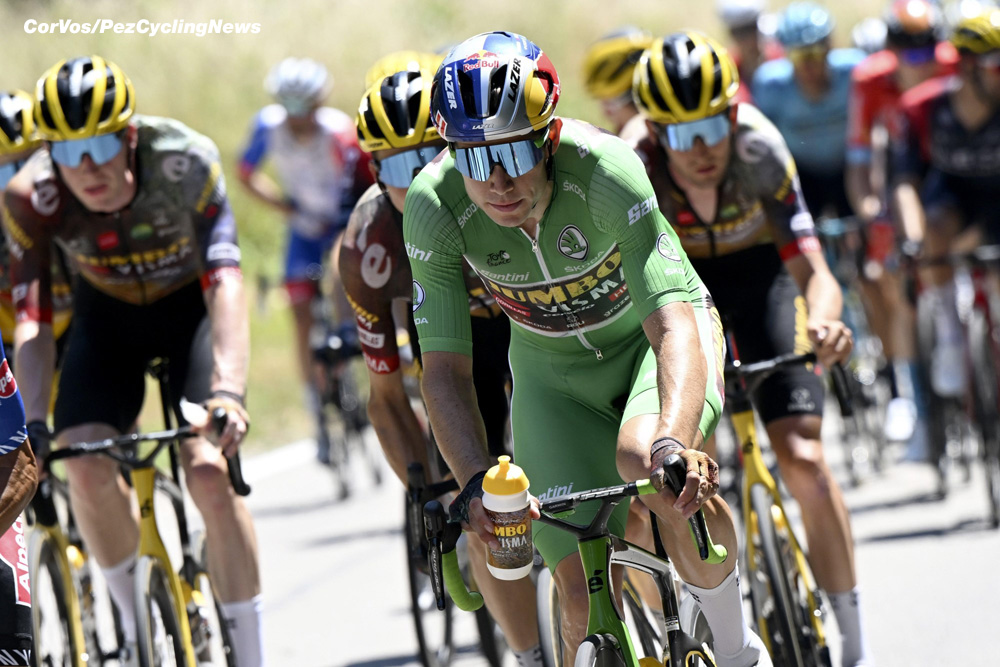 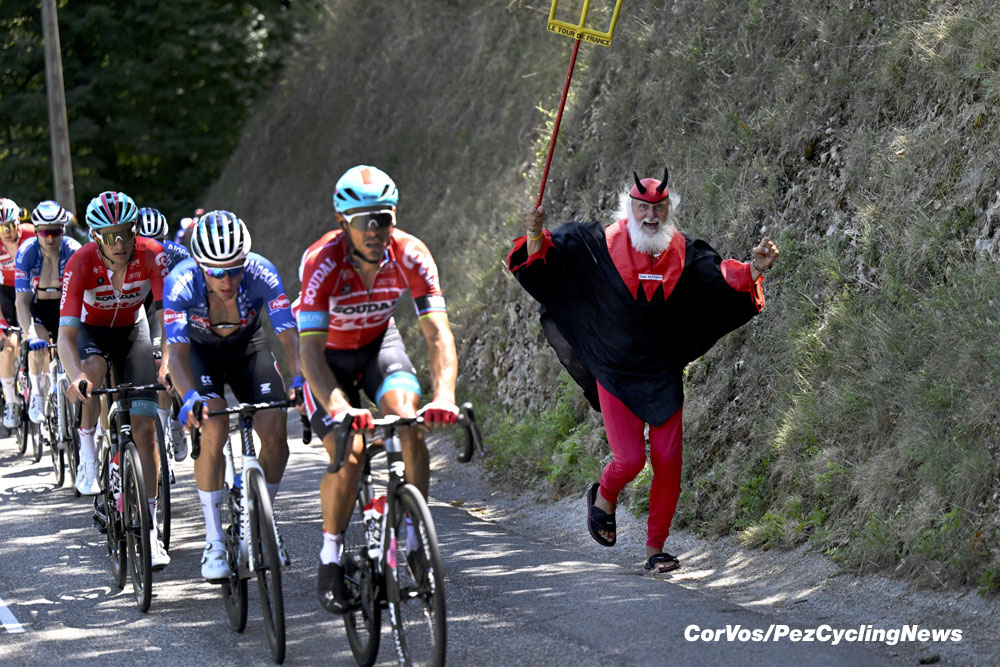 Didi the devil is back – Has he washed his clothes since last year? 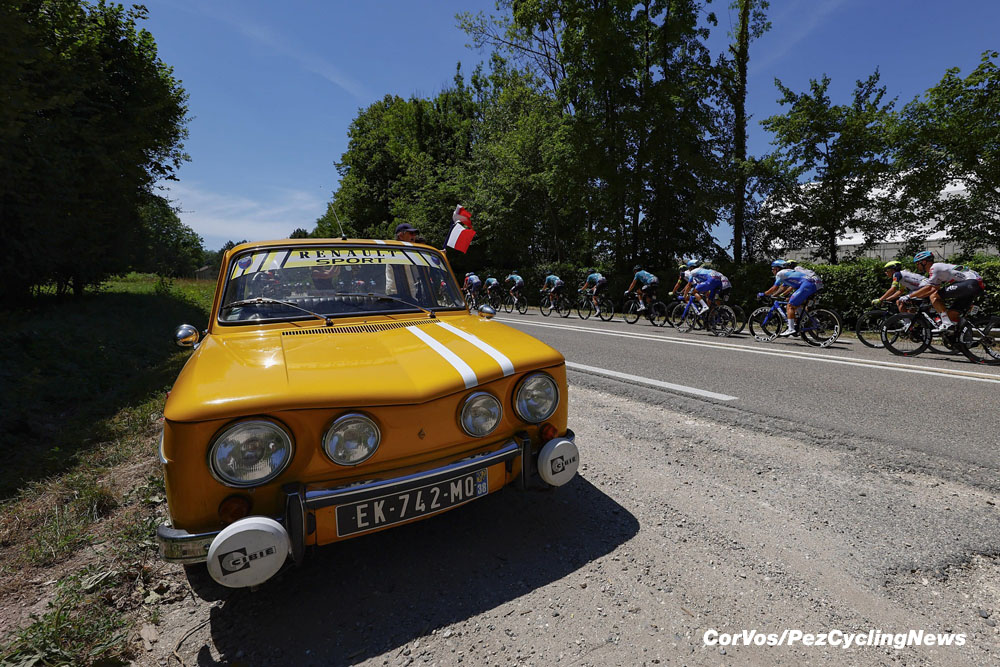 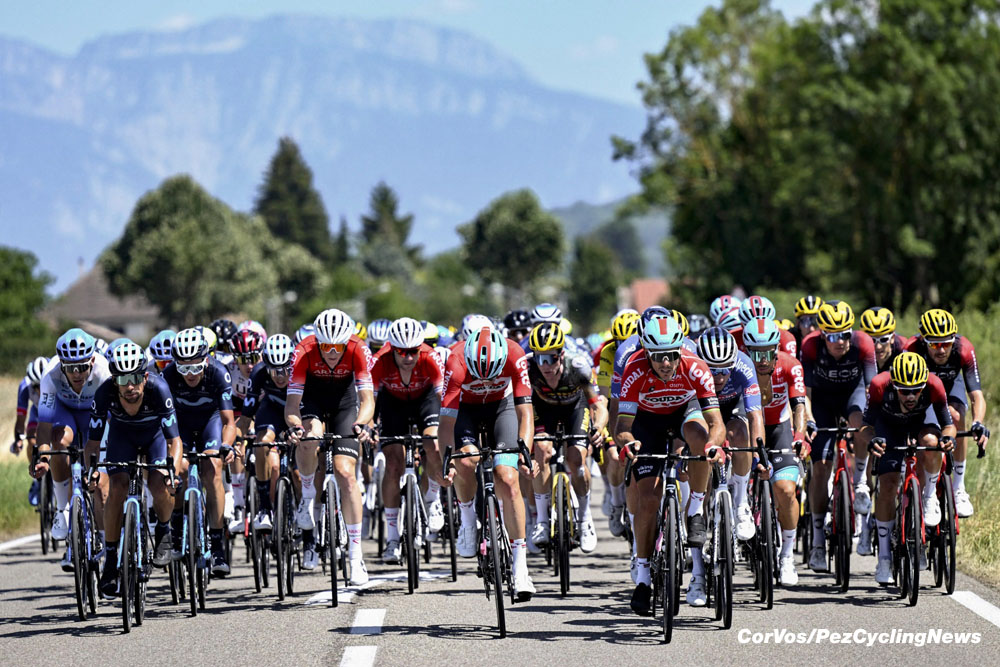 No rest for the peloton 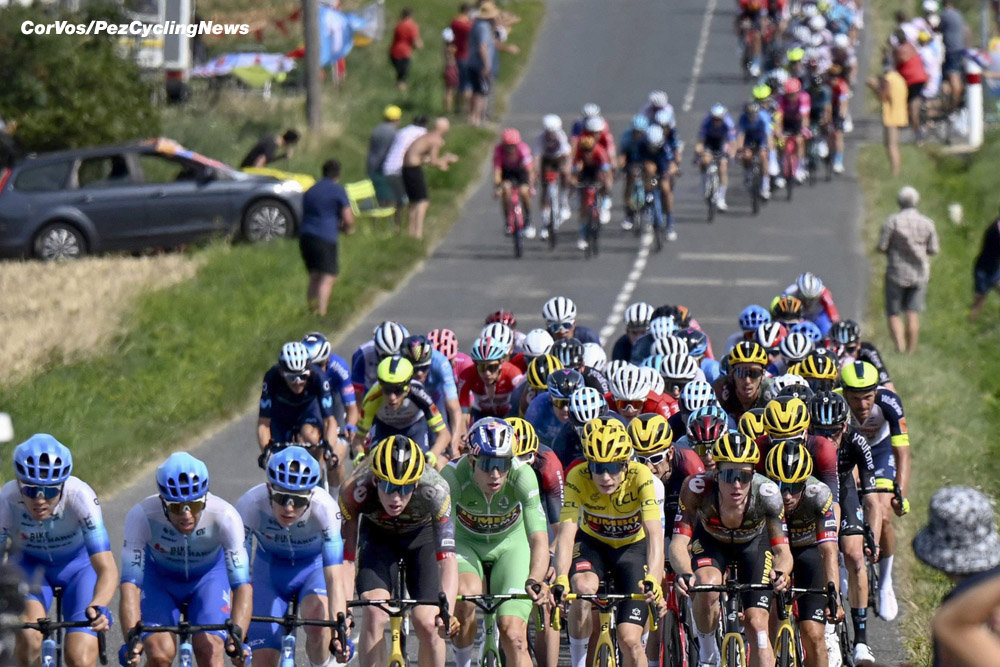 The echelons didn’t cause any problems in the end 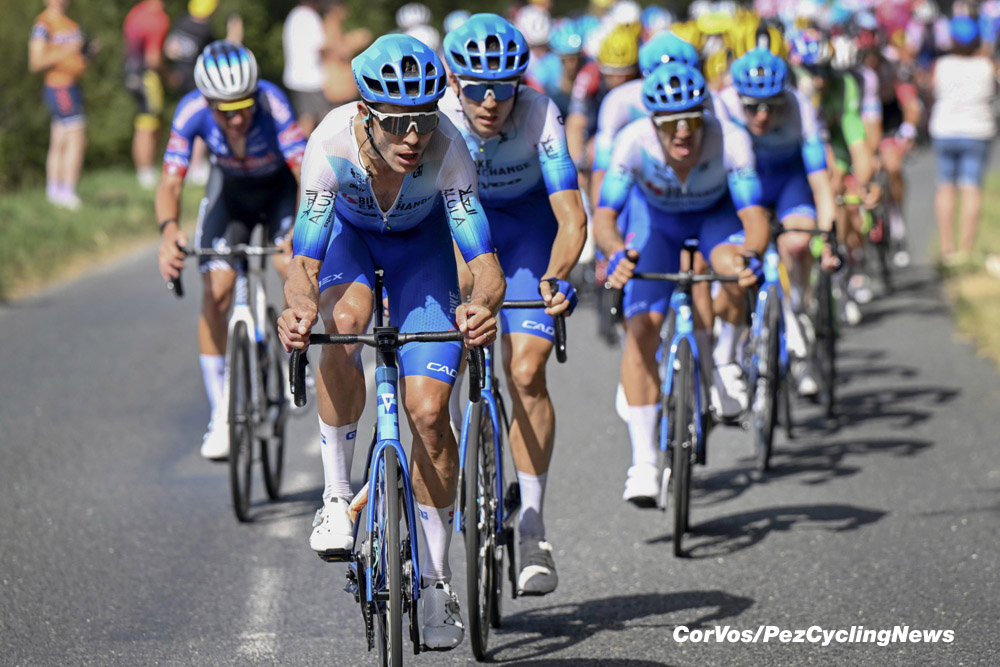 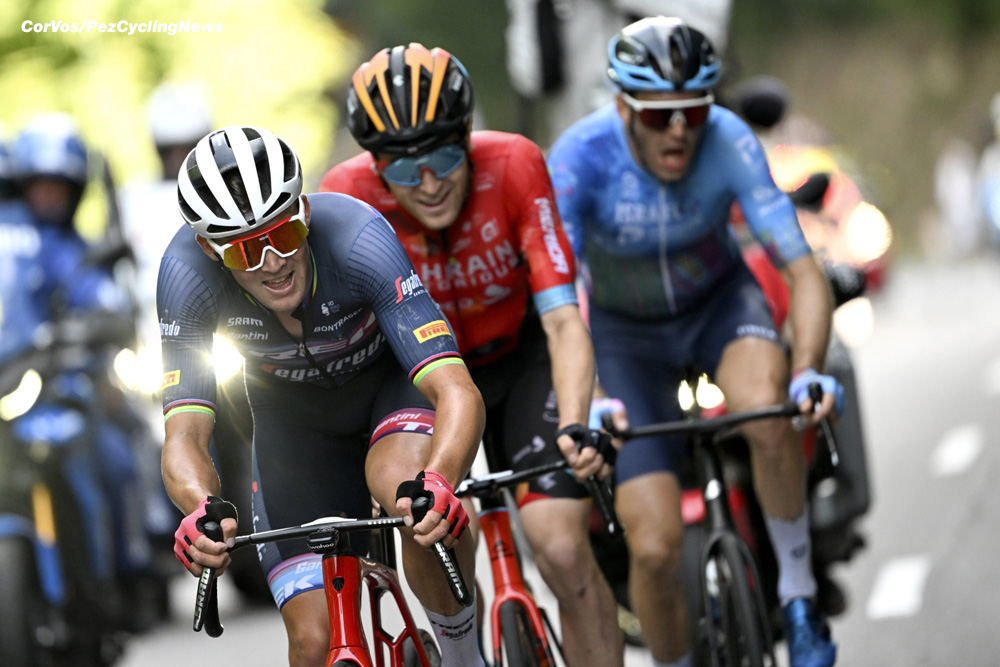 Then there were three: Pedersen, Wright and Houle 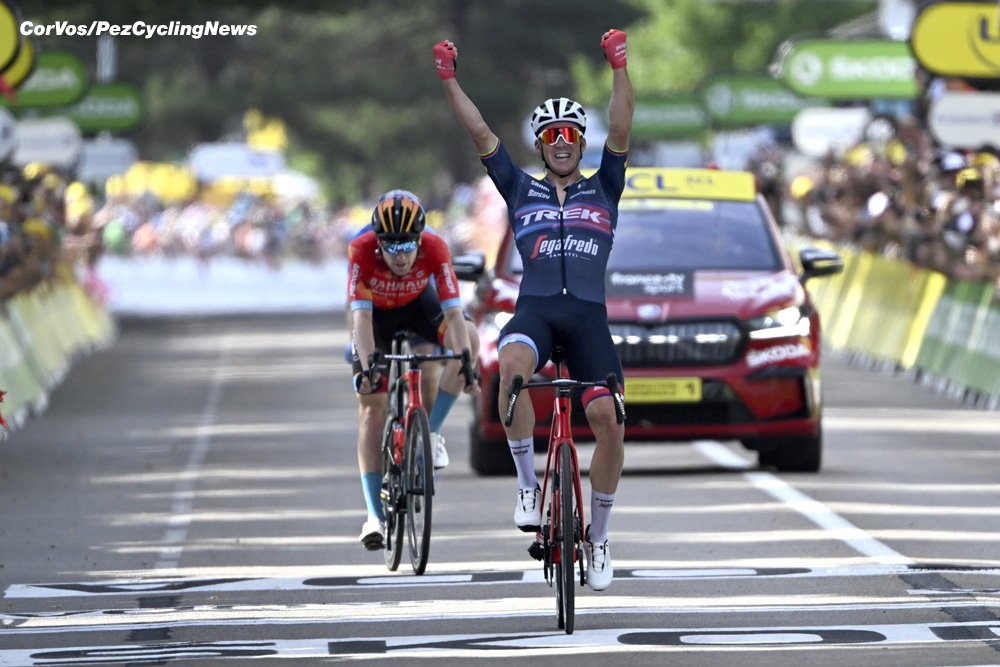 Hard to bet against Mads Pedersen 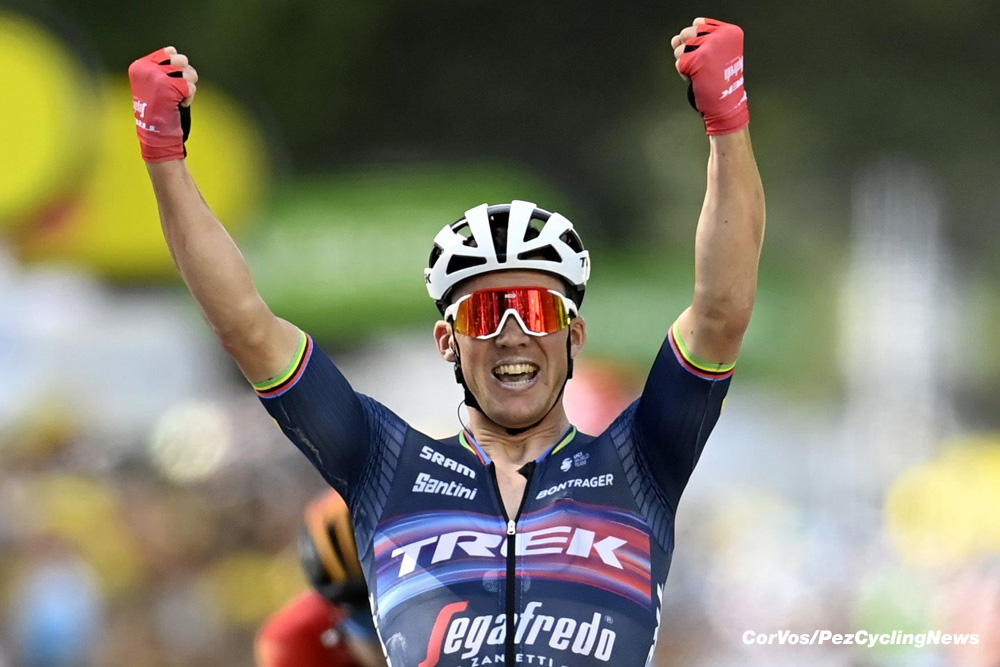 Another win for Denmark… and Mads Pedersen and Trek-Segafredo

stage winer, Mads Pedersen (Trek-Segafredo): “It’s incredible. I finally take the win I was looking for. Coming to the Tour, I knew my shape was good but I missed the opportunities in the first week. I took my chance today. It’s really nice to get the reward. As a team, we came only with riders for stages, it’s a relief to get one win. The plan was that if more than four riders in the break, we should be in and I should be in. But for a long time, I’ve thought it was a mistake and we’d get caught by the bunch. But it was hard for everyone. It was such a long day. With 12km to go, I thought we were too many guys in the front group so I tried to attack. Luckily we split up the break and it was easier to control.”